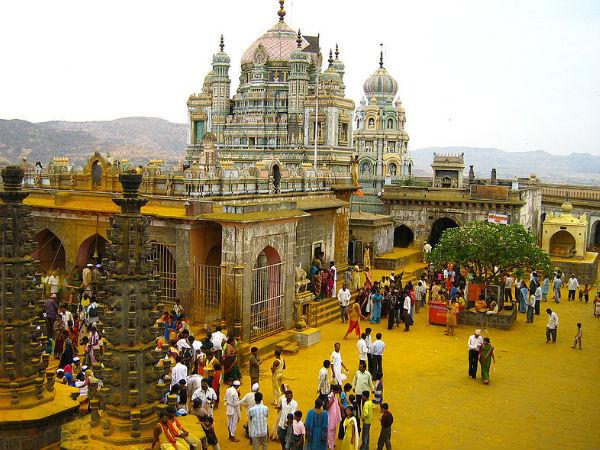 Legends pass on through folklore or literary evidences. However, it is fascinating to know how the legends are related to a certain deity (God) or a mythological character. In this article, we are taking you to Khandoba Temple in Jejuri which holds the interesting deity of Lord Khandoba!

Folklore says Khandoba is a warrior king and a form (incarnation) of Lord Shiva. Some Sanskrit versions recognise him as Martanda Bhairava, a fusion of Bhairava (the fierce form of Lord Shiva) and Martanda, the solar deity. Though there are many versions of Khandobas tales,he is one of the prominent Gods worshipped in Maharashtra, North Karnataka and some parts of Andhra Pradesh.

Khandoba Temple is located in the city of Jejuri in Pune. It is the prime temple among the Khandoba (Martanda Bhairava) Temples across Maharashtra. In fact, there are two shrines on top of a hill in Jejuri: one is Kadepathar and another is Gad-kot Temple.

As said earlier, there are many versions of the legends relating to Martanda Bhairava. One or two myths are very famous and are associated with the creation of this temple.

One of the major sources is the literary work, Malhari Mahatmya. Lord Khandoba is also known as Malhari (the warrior king). According to this literary work, the battle between Khandoba and the demons called Malla and Mani is the prime story behind the birth of Lord Martanda Bhairava.

The tale says that, the demon-brothers named Malla and Mani were creating a havoc in the world as they had got a boon from Lord Brahma. All Gods got annoyed by the menace they were creating on earth but were not able to destroy them. So, they requested Lord Shiva to destroy these demons. It is then Khandoba (a form of Shiva) was born. Finally, Malla and Mani were killed in the battle; while dying Mani asked for forgiveness by offering his white horse to Khandoba and gains a boon to be in every shrine of Martanda Bhairava.

In fact, the name Malhari or Mallari comes from the words 'Malla' and 'ari' which means the destroyer of Malla or the enemy of Malla.

In many oral traditions and other literary works Khandoba is described to be a tribal king and a womaniser. However, some descriptions are derived from Oleographic evidences (kind of block paintings) which are similar to the concept of Shiva, Parvathi and Ganga!

Some important paintings indicate to two women in Khandobas life. His first wife is Mhalsa and second wife is Bani or Banubai. The tales say that Mhalsa was not happy with Khadoba's second marriage to Bani and they fought often over this issue. Many oral traditions also have songs describing their fight!

So, Khandoba is said to have given the upper portion of the hill to his wife Mhalsa and gave the bottom of the hill to Bani. Interestingly, the temple of Bani is located at the foot of the hill.

Sanskrit texts connect the trio of Khandoba, Mhalsa and Bani to Lord Shiva, Parvathi and Ganga. However, the folklore suggests that Khandoba was a womaniser, he had five wives and many concubines.

Khandoba is the prime deity of farming, shepherd, hunter, tribal, warrior, lingayat and some Brahmin communities. It is a strong belief that Khandoba married women from different communities to indicate the equality of various castes and communities. Khandoba's fourth wife is said to be a gardener whereas his fifth wife was from oil presser caste.

Though Khandoba is not a major deity of Brahmin communities, he is the Kuldevata (family deity) of some Deshastha Brahmin families.

Interestingly, there are many Muslim devotees of Khandoba. Yes, once the Mughal emperor Aurangzeb is said to have driven out by the powers of Khandoba during an invasion. Since then, Muslims worship him as Ajmat Khan or Mallu Khan. A myth also suggests that Khandoba also had a Muslim wife.

Vaghya is a cult where boys wear a traditional costume and dance in the temple premise. Earlier, there was also a 'Devadasi system' where women courtesans called Murali were married to the Lord. Later, this system was abolished.

Vegetarian dishes like Puran Poli and Bharit Rodga is given as a religious offering to the God. Goat flesh is offered outside the temple eventhough Khandoba is described as non-vegetarian.

Six-day festival in the month of Margashira, Dasara and Chaitra Purnima are the famous festivals celebrated in Khandoba Temple.

It is really interesting to visit this hill top temple at Jejuri in Maharashtra.

Jejuri is around 50km from Pune. It is well-connected to other parts of the state. Visitors can take government run buses from Pune or hire private cabs to reach Jejuri.

Jejuri Railway Station is the nearest railway station to Khandoba Temple. You can also board trains from places like Pune and Mumbai to reach Jejuri.

Pune Airport is the nearest airport to the town of Jejuri.