Kesaria Stupa In Bihar – The Largest Abode Of The Almighty 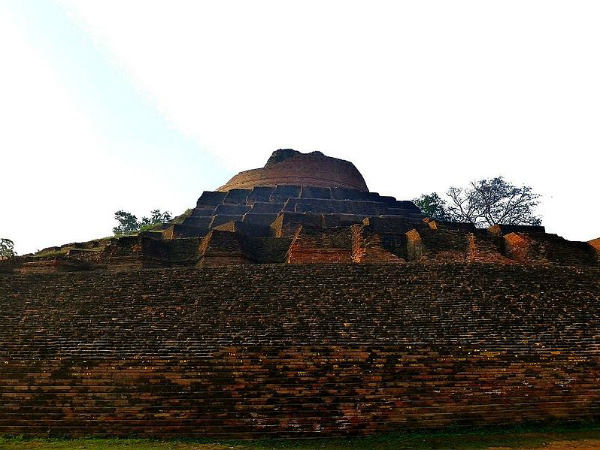 We often look down upon the state of Bihar as a very backward state with few facilities and many daily life problems. However, what we shouldn't forget is that the state of Bihar is one of the oldest places in the world which has shown paths to many greater countries in the past. It is here that many great religions of the world such as Buddhism and Jainism originated and it is here, where a few of the oldest universities flourished.

Therefore, there are many places of historical and religious importance scattered all around Bihar. Once such place is Kesaria, which has the world's largest stupa and is a must-visit destination in Bihar. Read on to know more about Kesaria Stupa in Bihar and how to reach it.

A Little Bit About Kesaria Stupa

Located at Kesaria in the East Champaran district of Bihar, Kesaria Stupa is known to be the largest stupa in the world. Hence, it is a major figure of ancient India which must be explored and visited by history lovers and travellers. It is said to have been built by the Mauryan King Ashoka.

However, as per records, Kesaria Stupa dates back to the era of the Gupta dynasty during the 3rd century. It was excavated during the year 1958, when K K Muhammad of the Archaeological Survey of India felt the site of the stupa has some historical significance. Earlier, it was considered by the locals to be the site of an ancient Shiva temple. Hence, it was also called Devalaya, the house of God.

During the excavation, several relics from the past were found which include Buddha images, arrowheads, copper items, Islamic coins, etc. Even though it is not regularly maintained by the archaeological department today, it is still a masterpiece which should be visited. So, how about a tour of Kesaria and taking a stroll around its stupa?

Why You Should Head To Kesaria

Apart from learning about the monumental stupa of Kesaria, you can also explore its surroundings. There are several places in and around the region of Kesaria which might leave you speechless with their ancient marvels and scenic beauty. A camera is a must-bring accessory if you are planning a tour to visit these alluring places and looking forward to capturing the best of Bihar.

The must-visit tourist attractions near Kesaria include Sitamarhi, the birthplace of Goddess Sita, Patna, the land of ancient buildings, and Muzaffarpur, of lychee gardens. So, when Bihar has so much to offer its visitors, why not give it a chance to welcome you? If you always love being at unexplored and hidden places, then Kesaria is the place you should visit this weekend.

The region around Kesaria experiences a hot climate during the summer season. Hence, the best time to visit Kesaria is from October until the end of March. However, Kesaria Stupa remains crowded with local tourists and history lovers throughout the year.

How To Reach Kesaria

By Air: The nearest airport from Kesaria is at Patna at a distance of about 120 km. It will take you an approximate time of 3 hr to reach your destination from Patna airport. You can either hire a cab or catch a bus to Kesaria.

By Rail: There are no direct trains available to Kesaria. Hence, you can catch a train to Chakia railway station, which is located at a distance of around 20 km. However, the major railhead is at Patna only as you can catch a direct train to Patna from any major city in the country.

By Road: Having a good road network, the region of Kesaria is well connected to nearby cities and towns and is easily accessible by road.

Comments
Read more about: india travel tourism caves temples buddhism bihar patna
Other articles published on May 12, 2018
We use cookies to ensure that we give you the best experience on our website. This includes cookies from third party social media websites and ad networks. Such third party cookies may track your use on Nativeplanet sites for better rendering. Our partners use cookies to ensure we show you advertising that is relevant to you. If you continue without changing your settings, we'll assume that you are happy to receive all cookies on Nativeplanet website. However, you can change your cookie settings at any time. Learn more
Change Settings Continue