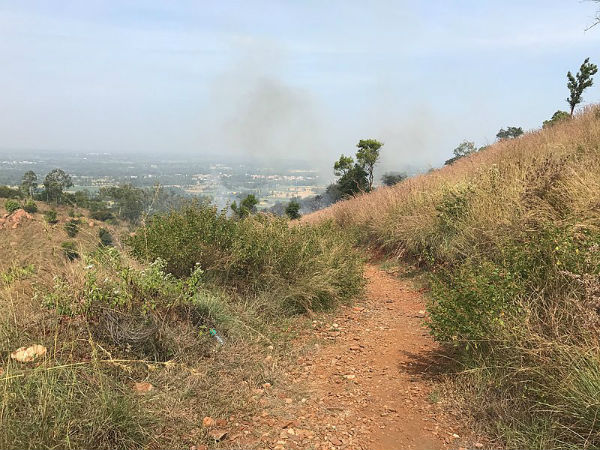 Overlooking the confluence of river Lokapavani and Cavery, the Karighatta hill is situated at an altitude of 2,967 meteres above the sea level. The beautiful abode is located near Srirangapatna and is well known among local folks as a place of deep spiritual significance in Hindu mythology. It is not just religion that attracts visitors but the scenic beauty and immersive experience close to nature has seen tourists flock over the place for weekend visits.

Being a hill station, travelers can visit the place at any time of the year. The nearby places however remain hot and sultry during summers so it is advised to carry water and food while making a visit during the summer season. If you are planning for a spiritual visit, you should not miss the traditional car festival that is annually held during the month of Kumbha Masa Palguna (February-March).

How To Reach Karighatta Hills

Srirangapatna is situated at a distance of 24 km from Mysore and 126 km for the city of Bangalore. The hill has a two-way access. One is via the rough 450 stone steps that pilgrims generally trek to the flat hilltop where Karighatta temple is located. The other route is a winding paved road for vehicular transport. It is advised to trek all the way to the top for it provides an enchanting experience if you are an adventure enthusiast, lonely traveler or simply a bird watcher.

By Rail: The nearest railway station is Srirangapatna which is well linked by major express trains to other nearby cities. From Srirangapatna, you can avail a private cab/bus to reach Karighatta which is at a distance of 6km.

By Road: Road connectivity is excellent in Karighatta. It is located off the Bangalore-Mysore highway and is linked to the nearby major cities of Bangalore and Mysore.

By Air: The nearby city of Mysore has a domestic air terminal which has a daily flight to Chennai.

The quadrangular temple complex atop of the Karighatta hills is a place for spiritual ecstasy. The architectural features are built to provide a breathtaking view. With lofty wooden gates guarding its entrance, the temple holds the deity of Lord Krigirivasa or Vishnu.

The sanctum sanctorum is dedicated to Vaikuntha Srinivasa and is flanked on both the sides by the idols of Bhoga and Yoga Srinivasa. The Dravida architecture symbols are reflected in its unique style of Gopurams and Kalashas. The central deity of Vishnu is carved out of black stone and to the eastern side lays the sanctorum of his consort, goddess Padmavathi.

The hill expanses vast tracts of agricultural fields and orchards of citrus fruits which look like lush green meadows when viewed from the top give an enthralling experience to the viewer. The local variety of grass or Dharbe Hullu is unique to the place and is used for ritualistic purpose. During the summer season, the grass dries and turns brown giving a smoky experience to the visitors and hence the hill acquires the name of Karighatta or ‘black hill'. The tamarind trees and dry scrubland running alone the bends of Cauvery River is an excellent site for picnic.

Confluence Of Lokapavani And Cauvery Rivers

The narrow valleys through which the Cauvery and Lokapavani River flows has always attracted the film industry for its breathtaking and majestic view. The rivers flow in speed along the narrow valleys and are surrounded by mango trees and numerous small shrines all along the bank.

Karighatta is a treatise for adventure seekers. The treacherous climb to the hilltop offers enchanting view of the trail left behind while climbing the summit. The entire trail is laden with lush gooseberry trees and ancient boulders. Leopards regularly visit various parts of the hills and various species of butterflies and birds flock the place which makes it a treatise for wildlife enthusiasts and bird watchers. Atop the hill is located a famous sunset point which turns the entire horizon crimson red with patches of clouds and reflect the silvery surface of the rivers, something which will last in the minds of visitors for long.

Comments
Read more about: travel
Other articles published on May 27, 2019