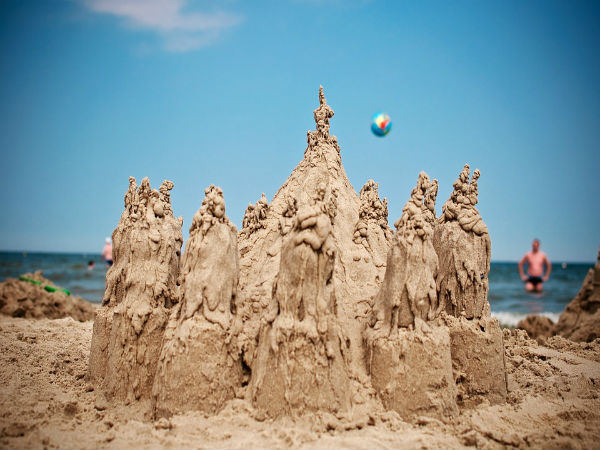 Most of us, as children, would have loved to play in the sands during the much-loved and expected visits to the beach. We would try our hands in building castles with secret passages, drawbridges, huge walls etc.

Well it was just a child's play back then for most of us; the little ones would consider their creations in the sand the best and would make plans to spend their entire life in building them. But sadly, the lifespan of these castles was until a wave would wash it down.

But sand art is not considered as a child's play any more, it is an art form which is truly beautiful and has been recognised worldwide for its large and complex constructions, made at various competitions by professionals.

Sand sculpting has become very popular in recent times, especially in the coastal regions, with sophisticated techniques and record-breaking creations, which have gained their place in the Guinness Book of World Records.

All said and done, how many of us know that there is an International Sand Art Festival in India? Yes, you read it right. The sand art festival in India is organised by the Odisha Tourism Department on the renowned Chandrabhaga Beach, which is located around 3 km away from Konark.

The sand art festival is an event for those of us who find love in the creations of the sand; it is also one of those events which would highlight the culture of Odisha and its wide tourism opportunities. The sand festival celebrates the sand sculptures made by skilful sand artisans from across the globe.

The festival does not restrict itself to sand sculptures but also opens up venues for stone, bronze, wood and every other material, which are sculptured by the artists. The festival has a free entry pass for its visitors who would enjoy the creations of the sand.

History Of The Art Festival

The International Sand Art Festival began in the year 2015 on the Chandrabhaga Beach as part of the Konark Dance Festival, which happens during the same time. Due to its close proximity to the Konark Sun Temple, both the events attract a large number of visitors from across the globe. The 2nd edition of the sand art festival is scheduled to be held from December 1st to 5th 2017.

The festival celebrates breathtaking displays of sand artists from India and from across the globe. The golden sands of the Chandrabhaga Beach transform themselves into beautiful sand exhibits in various sizes and shapes.

One can watch the renowned sand artist, Sudarsan Pattnaik, showcasing his best, at his home turf; he is also the brand ambassador of the event. The festival brings together 30 odd artisans from India and 10 plus artisans from Mexico, Singapore, France, Norway, Germany, Netherlands and USA. The tight competition between the participants is a must watch, the best artist would be awarded a cash prize of INR 100,000.

The event sees thousands of people from across the globe coming to watch this unique art form and in a way it helps the festival grow to get better year after year.