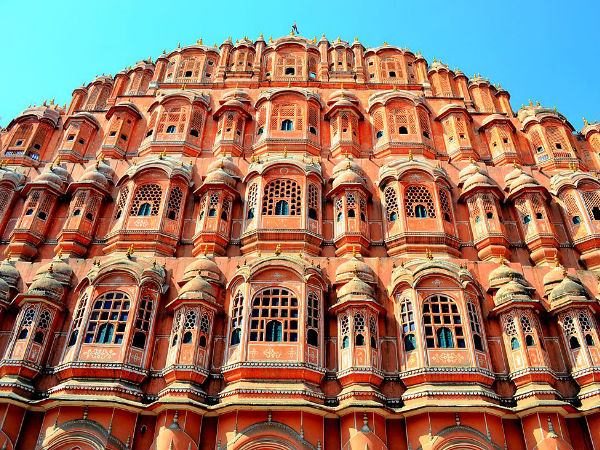 Rajasthan's palaces and forts are large in number, its architectures are the monuments today. Each architecture has its own history and grandeur in Rajasthan.

Hawa Mahal was built by Rajput Sawai Pratap Singh in 1799. These interesting facts about Hawa Mahal will depict its elegance and the reason behind such a design.

The palace is constructed with the red and pink sandstone, has a blend of Mughal and Rajasthani style of architecture. The artistic carvings and the structure of Hawal Mahal stands in the middle of the Jaipur in its elegance.

Hawa Mahal is a unique and popular tourist place that should not be missed in Rajasthan.

Let's know about some fun facts about Hawa Mahal!

Hawa Mahal is built in the shape of a crown, it looks like Lord Krishna's crown.

Sawai Pratap Singh was believed to be a great devotee of Lord Krishna. His passion became the reason behind this design.

Hawa Mahal means the 'Palace of Winds' or the 'Wind Palace'. It has 953 small windows (Jharokas), they were built to keep the wind blowing inside the palace.

It was a summer retreat for many Rajputs families during olden times. Hawa Mahal is one of the major attractions in Jaipur.

3. Built for the Royal Ladies

Hawa Mahal was constructed as a separate complex for the royal ladies.

The idea was that, royal women could watch the daily life of the city through the windows.

The facade of the building is structured like a bee hive.

The intricately designed windows allowed the royal women to watch the bustle of the city, without being visible to public.

Hawa Mahal doesn't have a direct entrance; one has to enter from the side of City Palace.

Hawa Mahal was built as a part of the City Palace, so there is no entrance from outside.

6. No Stairs to Reach the Upper Floors

Hawal Mahal has 5 floors and there are no stairs to climb, instead there are only ramps to reach the top floors.

Hawa Mahal got the name from its 5th floor, which was called as Hawa Mandir.

The palace with all its grandeur stands in the city and is one of the must visit places in Jaipur.