Nativeplanet
»
Travel guide
»Here’s Why You Should Definitely Travel To Ladakh This July!

Here’s Why You Should Definitely Travel To Ladakh This July! 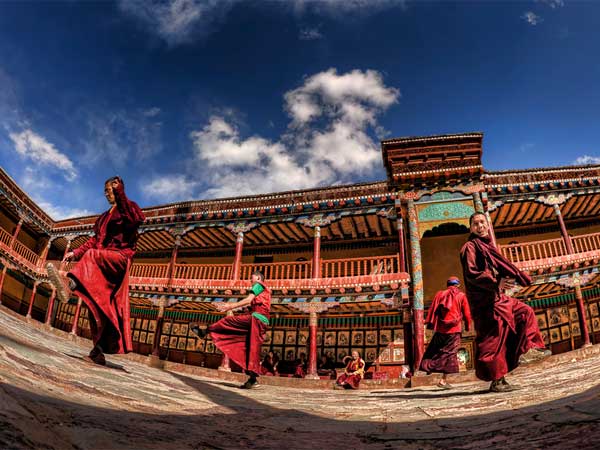 A land with unparalleled views, stark beauty, stunning landscapes, high mountain passes, warm and friendly people - is how one can describe Ladakh without second thoughts. This slice of paradise, Ladakh, is a region located in the state of Jammu & Kashmir in India. One of the sparsely populated areas, Ladakh is home to some of the most pristine and untouched lands in the country.

Given its harsh terrain and challenging weather conditions, Ladakh had managed to stay hidden and rarely explored for several decades. With the advent of travellers, adventurers and explorers since a few recent decades, Ladakh is now one of the most popular destinations in India for all kind of travellers. Every year, thousands of people from all over the world travel to Ladakh to experience its beauty.

Also read: 10 Things You Should Definitely Do When In Ladakh

Ladakh's mountainous terrain makes it an ideal destination for several adventurous activities and sports including treks, rafting, skiing, etc. The unique Himalayan flora and fauna also draw a lot of photographers and wildlife enthusiasts. Pangong Tso made famous by a Bollywood blockbuster "3 Idiots" sees an increasing number of visitors each year.

The best way to experience a place is to witness its true colours, heritage and culture. And the best way to see all of this is through its festivals. Ladakh celebrates many festivals in full pomp and grandeur. One of its famous festivals, the Hemis Festival just got over, it was held on 3 July 2017 at Hemis Monastery. But don't worry since the peak season is just taking off, there's galore of colourful festivals and celebrations coming up.

If you couldn't make it for the Hemis Festival, you can still plan for the other upcoming festivals. As Ladakhis prepare for the following celebrations, here's why you should plan a visit to Ladakh this month!

The Stongdey Monastery, located in the picturesque serves as a venue for this annual Monastery Festival of Ladakh. Perched on a hilltop in the serene Zanskar valley, Stongdey is the second largest monastic institution in Zanskar and a residence to around 60 monks.

Located at an altitude of 3500m above sea level, the monastery offers breathtaking views of the surrounding valleys, mountains and stark landscape of Zanskar. The monastery complex contains numerous temples with gorgeous wall paintings adorning the interiors. The most beautiful of all is the temple of Tshogs Khang that is decorated with beautiful paintings in black and gold.

When Is The Stongdey Gustor Festival Happening?

Every year, in the eleventh month (according to the Tibetan calendar) the annual festival of Stongde Gustor takes place here. One of the most popular festivals of Ladakh, this celebration draws numerous travellers from across the globe. The highlight of the Stongdey Gustor Festival is the sacred masked dance performed by the monks of this monastery.

This year, the Stongdey Gustor Festival dates are July 12th and 13th.

The Karsha Monastery or Karsha Gompa is the largest and biggest monastery located in the Padum Valley of Zanskar region in Ladakh. As the roads are snow-covered during most time of the year, July through October sees a relief as the snow clears off the roads. It is around this time that several Ladakhi festivals are rejoiced through the entire valley.

The monastery is located in the Karsha village huddled on the slopes of Zanskar mountains and set against a spectacular backdrop of the unending ranges, glaciers, and pristine rivers. Karsha village is also a popular spot for rafting over the wild and untamed Zanskar River. Zanskar is one of the most thrilling destinations in India for white water rafting.

When Is The Karsha Gustor Festival Happening??

This year Ladakh will celebrate the Karsha Gustor Festival on July 21st and 22nd.

Over the months of July through December several other festivals take place in various regions of Ladakh. You can club your trip to Ladakh in accordance with the festival dates to experience the essence of Ladakh and witness its unique culture and heritage through these festivals and celebrations.

The roads to Ladakh are snowbound for the major part of the year. Months of summer through early winter i.e., between April to September are ideal for planning a trip to Ladakh. Winters can get biting cold, and flying in is the only way to enter Ladakh as the roads are closed. However, a lot of adventurous souls do visit Ladakh during winters for its famous Frozen River Chadar Trek.

How To Reach Ladakh?

By Air: Leh Airport has regular connecting flights to and from Delhi, Jammu, Srinagar & few other places. Flying in to Ladakh will offer stunning vistas of the upper Himalayan mountain ranges and is the most beautiful sight ever.

By Train: The nearest railhead is at Jammu Tawi, which is 700 km from Ladakh and connected with major cities like Delhi, Kolkata and Mumbai. Other options are Pathankot (773 km) and Chandigarh (1000 km) railway stations, from where you can board a bus or hire a taxi.

By Road: To travel into Ladakh via roadways, there are two routes. One is Srinagar to Leh and another is Manali to Leh, both of which are breathtakingly beautiful. If you are a rider, you may want to participate in the biking expeditions to Ladakh that takes place every year. If you are up for a super long, bumpy ride, you can also consider the recent bus service that has started from Delhi to Leh.