Hampi: Time-Travel To A Town Standing Amidst 14th-century Ruins 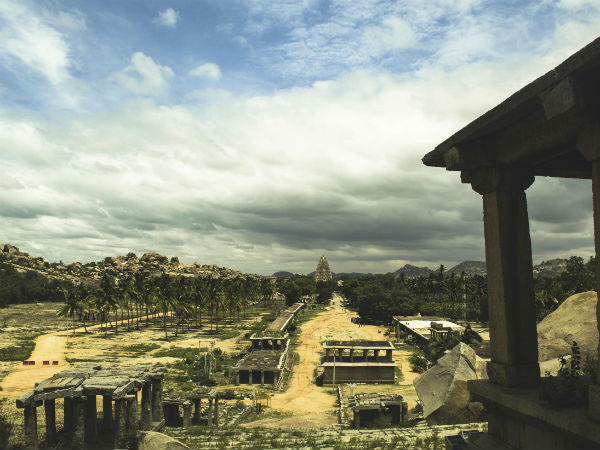 I had been working at a stretch now-day in and day out, from nine to five, behind a computer screen. It was the fifth day of the month and the week too; a sudden urge creeps into me-an urge to get out, a despair to see something different from my usual route between office and home. It was an irresistible desperation to be on the road.

It was that very restlessness that pressed me to board a shabby KSRTC bus that same evening and 7 hours later, the next morning, I was standing amidst a worn-out town whose history dates back to the early 15th century-Hampi.

A city beautifully constructed amongst ruins, a city with profound mythological background and, of course, a UNESCO World Heritage Site-none of these explain the small town of Hampi better than the other. It is one of those places that makes you fall in love with it, right at the moment you step in. My hasty escape from the hustle and bustle of India's Silicon Valley had paid off.

Surpassing The Borders Of History & Culture

Located at a distance of about 350 km north-west of Bangalore, the magical town of Hampi was the capital of the royal Vijaynagar Empire during the 14th-16th centuries AD. However, today Hampi remains to be a crumbling old hamlet where the boulder-strewn landscape looks like it is straight out of history books.

Everything in and around this hamlet looks so real but feels so unreal. You can visualise (in every sense of the word) an age-old civilisation coming to life for a split second.

In order to preserve the ruins of the ancient Vijayanagara Empire, Hampi was pronounced as a World Heritage Site by UNESCO in 1986.

Soak In The Aura Of The Ancient

You can spend an entire day simply roaming in and around the little town, exploring the ancient, local temples and the marvel of historic architecture dating back to 1 CE. Climb on top of the Mathanga Hill to spot the monolithic Nandi idol, and from there you can follow the trail to reach the stone chariots of Achyutaraya Temple.

On crossing the Tungabhadra river (the chief water source of the region), a whole new world awaits you to embrace solitude and peace. This generally neglected side of Hampi is a world of its own. It basically constitutes the small village of Virupapura Gadde-most commonly known as Hippie Island.

As the name suggests, this particular side of the river has a very laid-back feeling compared to the rest of Hampi. For the budget travellers and people who are not very fond of the crowd, the other side of the river hosts ample cafes and homestays wherein you can find your solace.

Remember Kishkinda from Ramaya, the birthplace of Hanuman? It is located across the river on top of the Anjaneya Hill.

The Ideal Destination To Unwind

When you're at Hampi, just let the history of the place soak in as you hike through small hillocks built of giant rocks. Don't miss a lifetime experience of cruising down the Tungabhadra river on a coracle. Your mobile phone might struggle to catch a signal, but that's what getaways are meant to be-away from all 20th-century modernism. Isn't it?

Meanwhile, you are sure to get blown away by the free spirits of the hippie community at the Hippie Island. Or simply, rent a bicycle and embark on a lovely ride while stopping at every historical monument en route.

Concisely, Hampi still carries in its air the essence of mythology, history and fantasy, all in a perfect blend. As you retire from your trip at Hampi, you'll definitely promise yourself to be back soon and explore more of this dreamy place built of stone. The mystical town of Hampi can get you stuck in awe, as you admire the architectural marvel of historical India as well as the interesting folktales that have been running in the region and beyond for centuries now.

Regardless of how you're travelling, from Hosapete your journey will gradually be taken over by comparatively thinner lanes zigzagging through betel leaf-farms, from where you can start spotting the ruins of the Vijayanagar Empire.

By Air: Bangalore is the nearest international airport and Bellary the domestic one. From Bellary Airport, you can take a taxi to reach Hampi comfortably.

By Train: The nearest railhead from Hampi is located in Hosapete at a distance of 13 km. You get ample cabs that will take you to your destination comfortably. Hosapete Junction railway station is well connected to major cities like Bangalore, Hyderabad, Goa, etc.

By Bus: There are many private and state buses that can easily take you to the place without any difficulty. From Hyderabad (361 km), Bangalore (372 km) and Hubli (162 km) one can even opt for an exciting road trip.