Gurudongmar Lake – Witness One Of The Highest Lakes In The World 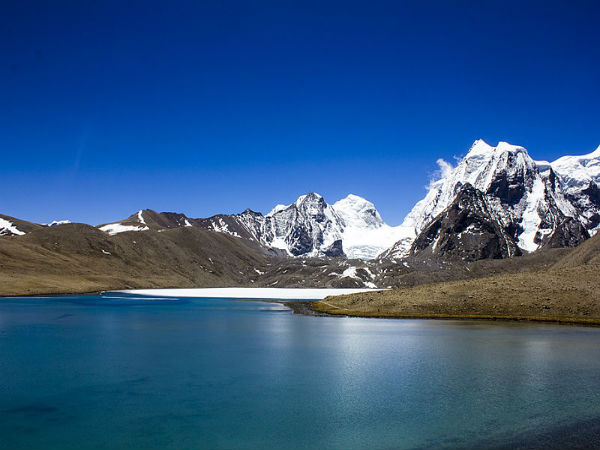 Sikkim is a state full of awe-inspiring, immaculate beauty. With lush greenery, lofty and breathtaking mountains, innumerable waterfalls and more, it is certainly worth a visit. North Sikkim is even more exceptionally beautiful, especially due to the snowfalls that happen during the winter.

One such place in North Sikkim, that will truly give you the meaning of heaven on earth, is the Gurudongmar Lake. Perched at a fearsome altitude of 17,800 ft, Gurudongmar Lake is one of the highest lakes in the world. The pristine lake is so blue and clean that a clear reflection of the snow-capped mountains can be seen on the face of it.

Surrounded by nothing but stretches of snowy mountain ranges, the spectacular lake tends to form an ice sheet during the extremes of winter season. The name Gurudongmar is actually derived from Guru Padmasambhava, who is the founder of Tibetan Buddhism. The locals believe that he visited the lake in the 8th century.

The lake is fed by glaciers and is surrounded by animals, like blue sheep and yaks. Although the lake might seem quite small at sight, it is in fact spread across an area of 290 acres.

There are quite a few interesting legends tagged with the Gurudongmar Lake. One of these legends say that Guru Padmasambhava is the reason why the lake remains unfrozen for some parts of the year.

They believe that on his visit to the lake, he saw the frozen lake and believed it to be worthy of respect, since it looked so much like a divine place. But since the lake remained frozen almost throughout the year, the locals pleaded the Guru to help them.

Abiding by their pleas, Guru Padmasambhava placed his hand on a corner of the lake which defroze the lake, thus, helping the locals.

According to another popular legend, the lake is believed to have been visited by the Sikh saint Guru Nanak while returning to Tibet. The story is somewhat similar to that of the one with Guru Padmasambhava.

The lake is believed to have been unfrozen by him with the touch of his stick, in order to help the locals. However, this legend has been falsified by the Namgyal Institute of Tibetology as well as the Sikkim Government.

April to June are the best months to visit North Sikkim and Gurudongmar Lake. The climate will be balmy and pleasantly cold. If you wish to witness a semi-frozen lake then visit between the months of November to January. However, you will have to equip yourself with a lot of winter clothes for this season.

How to Reach Gurudongmar Lake

By Air: The closest airport to Sikkim lies in Bagdogra. It is 125 km away from North Sikkim and is connected to cities, like Guwahati, Kolkata, Delhi, etc. The only way to reach Sikkim from Bagdogra is through taxis which will be available outside the airport.

By Road: Travelling all the way from Bagdogra to North Sikkim might be a strenuous task for a single day, so, it is advised to take a break at Gangtok. The journey from Gangtok to North Sikkim is filled the most beautiful vistas that will be particularly enjoyed by photographers.

It takes about 6 hours but according to the weather and road conditions it might vary by 2 hours. You can hire taxis or book a private car to travel from Gangtok to North Sikkim.

Comments
Read more about: lakes india sikkim vacation nature travel
Other articles published on Sep 8, 2017
We use cookies to ensure that we give you the best experience on our website. This includes cookies from third party social media websites and ad networks. Such third party cookies may track your use on Nativeplanet sites for better rendering. Our partners use cookies to ensure we show you advertising that is relevant to you. If you continue without changing your settings, we'll assume that you are happy to receive all cookies on Nativeplanet website. However, you can change your cookie settings at any time. Learn more
Change Settings Continue