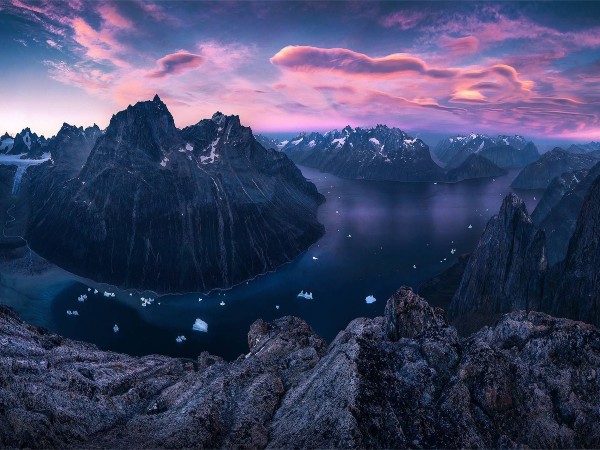 Constant movement recycles the Ice sheet, and in places, it's 100,000 years old at its edge. Enormous glaciers are forced outwards to the coast, where they break off into icebergs. The Sermeq Kujalleq glacier on the west coast reaches the sea through the Ilulissat Icefjord, advancing at 19 m (65 ft) per day and calving over 35 cubic km of ice per year. Now in dramatic retreat - 15 km (9 mi) in four years - the World Heritage Site of Ilulissat is a spectacular demonstration of climate change.

Ice defines Greenland's culture and ecology as well as its weather. People have lived on its ice-free margins for 4,500 years, and in the south and west, you can see hundreds of major ruins demonstrating the fusion of Inuit, Viking and recent Danish cultures. You can participate in modern Innuit culture in Qaanaaq in the north. Besides the traditional drum dancing, singing and Kayak demonstrations, you can hunt or fish on a dog sledge trip among walrus, seals, musk oxen and huge bird colonies. In season, it's one of the best places to revel in both the midnight sun and the Northern Lights (Aurora Borealis).

The ice here locks both land and sea, and culture belongs to the hunter/gatherer and the polar bear. Yet global warming means that the date of hundreds of millions of us depends on the future of the Greenland ice sheet.

May to July for 24-hour daylight; November to February for polar darkness. The Northern Lights are usually most impressive in the months of September and March.

To catch a domestic flight within Greenland you can go to Kangerlussuaq. Visitors also use scheduled ferries on the west coast or helicopters. Cruise ships call at Ittoqqortoomiit.

The Icelandic Sagas describe the arrival in Greenland of Norse settlers in 982. The last word concerning the Viking population is an account of a wedding in Hvalsey Church, Qaqortoq (still standing) in 1408, found in the annals of the Vatican, in Rome.