5 Places You Mustn’t Miss In Mahabalipuram 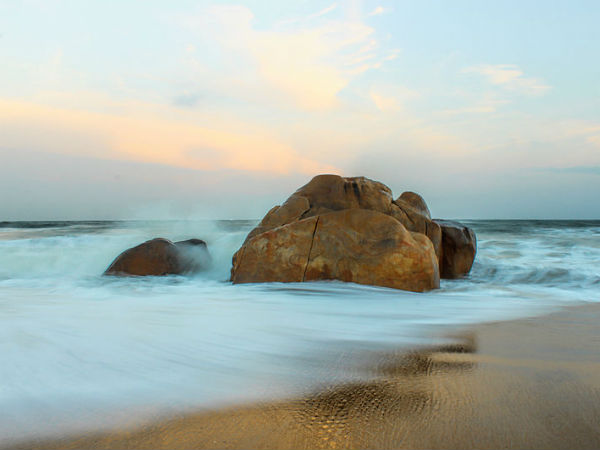 Mahabalipuram or Mamallapuram is an ancient port city in the Kancheepuram district of Tamil Nadu. Once a bustling seaport and a busy trading centre, the place is now one of the major tourist attractions near Chennai. Mahabalipuram has a rich history and heritage that is well-preserved to date and speaks volumes of its glory.

Mahabalipuram is one of the oldest cities in India. Present day, it is known for its great monuments, cave sanctuaries and sculptures. A monument complex at Mahabalipuram, known as the Group of Monuments, with all its rock art and relief sculptures, is a UNESCO world site.

Once ruled by the Pallavas, famed for their excellent architecture and sculptures, Mahabalipuram has beautiful rock-cut monuments that draws architects, history enthusiasts and travellers from around the world. Mahabalipuram is famous for its vast beach, monoliths, stone carvings and temples. True, you mustn't miss these while in Mahabalipuram. But the port city has more to offer to those who love to explore.

Situated on the shores of Bay of Bengal, Mahabalipuram has a moderate and humid climate round the year. Though it can be visited throughout the year, summers get pretty hot. Some travellers venture out in monsoon, as monsoon brings in a fresh look to the place. But by most votes, the best time to visit is during the cooler months of October through March.

The impressive Light House stands on the rocky patches near the Mahabalipuram shore. It can be visited between 9 AM and 5.30 PM by paying a nominal entry fee. On climbing the spiral staircase and reaching the top, a panoramic view of the vast seashore, several rock structures and the town below can be seen.

The Maritime Heritage Museum is an interesting place to visit. On its display, it has a few working models of the Egyptian papyrus boats, wooden, steel and diesel ships, maps of ancient sea routes, and detailed information about lights, buoys and various devices used for communication and navigation purposes. Those interested in marine technology will find a visit to this place informative.

Not many know about the Seashell Museum in Mahabalipuram, which is Asia's largest sea shell museum. The museum has more than 20,000 kinds of shells, conchs, corals and fossils on display. This beautiful museum has a myriad of shells and conchs of different sizes, in interesting shapes and patterns and stunning colours.

Dating back to the 8th century, the stunning Shore Temple is a two-temple structure that stands facing the sea. Legends say, there once existed more than five structures so spectacular that it invited the envy of the gods who unleashed the sea on it. A few submerged structures remain in the area, making way for some truth in the myth.

Panch Rathas, meaning five chariots, are magnificent stone structures, each carved out of a single huge boulder. There is one structure each for the five Pandava brothers, significant characters of the Indian epic Mahabharata. Each monolithic structure showcases intricate carvings and fine work of art by the skilled artisans of the 7th century.