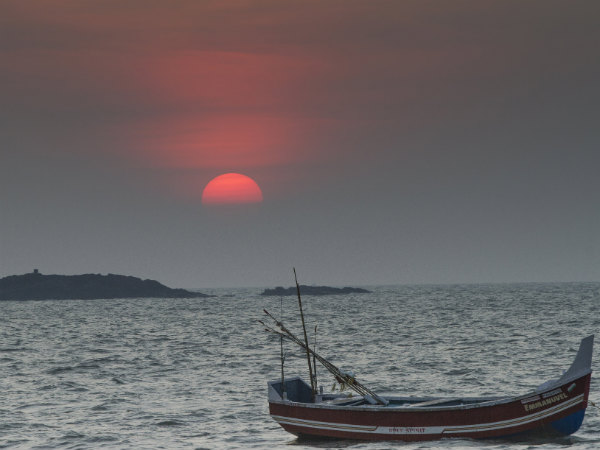 The coastline of Malpe apparates just as you are closer to the beach; the blanket of sand, the sound of waves, the fishing nets and the smell of fish indicates that you are at the right destination. The sights of people playing around on the sea shore and the horizons of the Arabian Sea makes you impatient to dive in at once. Such is the magical aura of Malpe you need to experience to the fullest. Malpe visit is incomplete without a trip to the famous St.Mary's Islands located near to Malpe Beach.

Yeah, It is a Geological Monument!

The columnar basaltic (Volcanic) rock formations are the prominent attractions in St.Mary's Islands. These structures are unique in India. Hence, St.Mary's Islands is listed as one of the Geological Monuments of Karnataka and India.

All we know is that Vasco da Gama first landed in Kozhikode (Calicut) in Kerala. However, the folklore of Malpe says he made a pitstop at St.Mary's Islands (Bahadurgarh Island) before he took off to Calicut. It is him who put a cross and named it as O Padrao de Santa Maria for Mother Mary. Therefore, indicating the origination of the name St.Mary's Islands.

A popular destination as this must have many names! Yes, St.Mary's Islands is also called as Coconut Island and Thonsepar Islands.

The name Coconut Island comes from one among the four islands. All we can is the amazing coconut trees hovering this piece of the isle.

The hexagonal shaped pillar-like rocks perched on the Northern Island of St.Mary's is a unique attraction. These basaltic rock formations make it a photogenic destination for sure! In fact, it is because of these 'columnar joints' or 'laminar lava' that it is listed as one of National Geological Monuments.

You can happily chant 'She Sells Sea-Shells on the Sea-Shore' as you will find numerous conches and seashells at St.Mary's Island. You can collect different kinds of sea shells spread across the islands.

Malpe is the only way

Tourists can reach St.Mary's Islands only through the ferries from Malpe. Ferry's start from Malpe Jetty from 9 AM and runs till 5 PM. However, each trip depends on the number of people. Sometimes you have to wait till there are enough people to fill the boat.

The ferry ride from the Malpe jetty to St.Mary's Islands is amazing as you can see many birds. Especially in the evening, you can catch the sunset while sailing in the sea. You will also find the flocks of birds on one of the rocky patches on the sea. Birds like Sea Gulls and Brahminy Kites are familiar sights here.

Overall, St.Mary's Islands is a must-visit destination in Udupi. Along with that, Malpe Beach and the nearby Kaup Beach are some of the best beaches in Karnataka. So, backpack, sail and get lost in the charming vistas of this mystical land floating on the sea!

Note: St.Mary's Islands will be closed during the monsoon seasons. It will open in the mid-September onwards.