Bisti Widlerness: A Must-See Natural Wonder In The USA 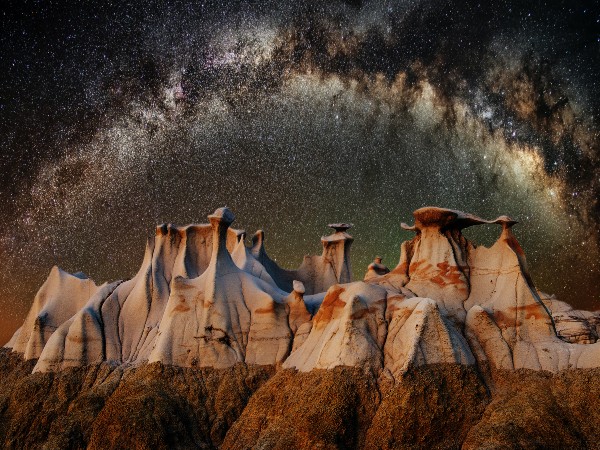 Silent dawn, silent dusk - no rings, no chimes, not even the sound of frogs or crickets. The panoramic sky above the lofty New Mexico's arid land in the USA is so clear that the Milky Way, the moon and the star, among all other celestial bodies, sprinkle the terrain in a ghostly light.

Then a fierce coyote wails out across the devoid land 'Bisti Wilderness', observed by another, then three, four... rising to a total ensemble. And gradually like in an Orchestra, one by one the howling gets faint, leaving only the show stopper of this bizarre performance. In their nightly bizarre medley, 'song coyote' add an eerie dimension to an already weird scene.

Suitably, the sculptures are called 'Hoodoos' - an African expression that means 'soul-spirit'. And spread among them are 100-million-year-old antediluvians of palm fronds, cypress tree stumps and dinosaurs.

Peeking around this quiet and devoid terrain with a little whiff of animal or plant life, it is challenging to picture that it was once a sticky wetland teeming with the life force that fibbed near the edge of an expansive inland sea.

Dinosaurs smashed their way through the steamy rainforests dense with massive trees and ferns - among them dinosaurs with five-horned giants, duck-bills, and extreme predatory tyrannosaurs that dined on smaller reptiles. The primal mammals lived there, too - opossum-like beasts the size of rodents.

The remains of plants and bones were squelched in the marshland's mud and sand, which shrank over tens and hundreds of millions of years to form shale and sandstone. Decaying foliage was slowly disseminated into coal and peat.

The Bisti Wilderness has proffered scientists an image of a theatrical turning point in the Earth's past. The stick-in-the-muds discovered there contain remains of both warm-blooded mammals and massive dinosaurs.