A Frozen River Trek In Ladakh Which Is Not Chadar 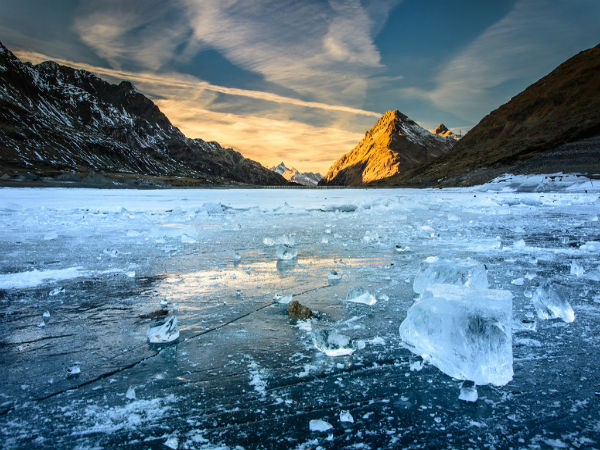 At a towering height of 12, 467 ft, Indus Valley casts a charm on you at the very first glance. Known as the backbone of Ladakh, the secretive Indus river sustains itself with the dizzying pinnacles, mysterious valleys and the major towns of Shey, Leh, Basgo and Tingmosgang on its banks.

Resembling a moonscape, the valley's beauty is totally bewitching with layers of snow shimmering away like thousand little suns while frost-covered monasteries greet you at sporadic intervals. As you trek, you'll see one too many frozen lakes reflecting the blue skies in their waters. One of the most captivating treks in the country, which spans for nine days, walking atop the frozen Indus river will stay with you for a long time.

The trek takes you through steep slopes and uncompromising terrains that can't be charted independently and must be embarked with the help of professionals.

The first season for the trek would be from in the months of January and February, when the hills are covered with snow and the river remains frozen. The second season begins from mid-June and goes on until September, when the weather remains pleasant.

The nine-day-long trek's base camp lies in Leh and comes to an end at Korzok village, which lies on banks of Tso Moriri.The trek begins with a 138 km long drive from Leh to Chumathang, from where the trek actually begins.

After which one would make a number of stops at various campsites along the riverfront of Indus and the village of Mahe.Crossing many dreadful gorges and snow-filled valleys, the arctic weather goes a step higher when you reach the town of Chumathang.

On careful observation, one would notice that although the Indus is frozen, its choppy water flows beneath the ice. For some warmth one can opt to have a dip in the hot springs of Chumathang.

The Walk On The Frozen River

The most intoxicating stretch of the trek begins on the fourth day. One would start walking on the frozen river in the morning with the guides helping you identify the most solid tracks. Certain stretches here might require you hold on tight to your mate's hands, as the weather conditions tend to be very unpredictable.

For most parts, you have to be precariously balancing your steps over the frozen river. Feel that jolt of happiness every time you cover a stretch successfully. After which you'll be marvelled to have captured the frozen streams, waterfalls and the tributaries of Indus.

After this journey comes a drive from Mahe to the campsite at the edge of frozen Tso Moriri Lake. Here one would come across Himalayan shepherds and a number of indigenous tribes of Ladakh, who would give you a better understanding of the local way of living.

Filled with wildlife, the banks of Tso Moriri are filled with mountain goats, blue sheep and the odd wolf. Hike to the village of Korzok, where if you are lucky enough you might come across the elusive snow leopard, which is also known as the grey ghost of the Himalayas.

Make sure you pack some heavy woollen clothes, sturdy shoes, gloves, caps and sleeping bags, especially if you are travelling during the months of November through January.

Comments
Read more about: travel india nature trek ladakh leh december valleys
Other articles published on Dec 12, 2017
We use cookies to ensure that we give you the best experience on our website. This includes cookies from third party social media websites and ad networks. Such third party cookies may track your use on Nativeplanet sites for better rendering. Our partners use cookies to ensure we show you advertising that is relevant to you. If you continue without changing your settings, we'll assume that you are happy to receive all cookies on Nativeplanet website. However, you can change your cookie settings at any time. Learn more
Change Settings Continue