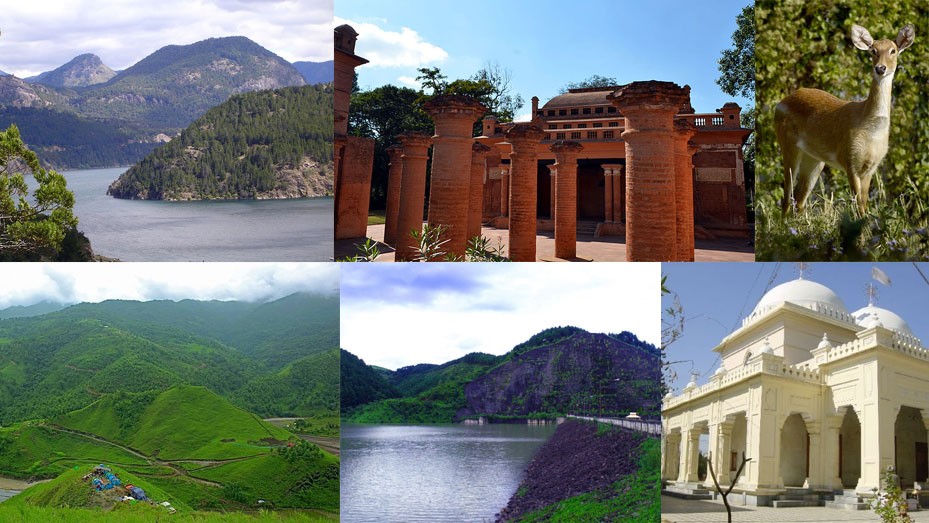 Manipur tourism has its own indigenous aspects for those smitten by wanderlust. The Shirui lily, the Sangai deer, the floating islands at the Loktak Lake, the verdant green expanse, its moderate climate and its ethnicity are unique characteristics of this north-eastern state of India. Travelling to this place is nevertheless intriguing and interesting.

Manipur is bordered by Nagaland in the north, Mizoram in the south, Assam in the west and Burma in the east.

Imphal, the capital city of Manipur abounds in scenic beauty and wildlife. Many eyebrows will be raised on knowing that the game Polo originated in Imphal. The place also houses a lot of ancient relics, temples and monuments. Imphal finds itself mentioned in the Second World War owing to the Battle of Imphal and the Battle of Kohima.

It is clustered with numerous tourist places that simply add to Manipur tourism. Shree Govindajee Temple, the Kangla Palace, War Cemeteries, Ima Keithel—a bazaar run by the women folk only— Imphal Valley and a couple of gardens are some places that make the place utterly touristy.

Chandel, a district and town, is special as it happens to be the gateway to Myanmar. It is undoubtedly an integral aspect of Manipur tourism. Chandel and Tamenglong abound in biodiversity with their varied species of flora and fauna. Moreh in Chandel happens to be the commercial hub of Manipur. The Orange Festival in Tamenglong attracts tourists and people from nearby places for a fruity festivity, making it a major tourist attraction.

Senapati boasts of small villages that have a tinge of uniqueness making it touristy. Maram Khullen, Makhel and Yangkhullen bespeak of history; Mao is the gateway to the state of Manipur; Purul is the land of Toutou, a popular game of the state.

Loktak Lake">Loktak lake is the largest floating lake in the world and serves as a remarkable tourist attraction of Bishnupur in Manipur with its phumdis, or floating islands, inhabited by the fishermen. Sendra Island on Loktak Lake is a must-visit picnic spot. Keibul Lamjao National Park, where the endangered Sangai deer inhabits, is found in the vicinity of this lake.

Zeilad lake in Tamenglong is picture-perfect and attracts tourists interested in adventure, so is Waithou Lake in Thoubal district which abounds in scenic splendour. Thoubal district in Manipur is a flourished agricultural district with picturesque paddy fields forming an integral part of its pristine beauty. Ikop Lake, Louis Lake and Pumlen Lake are some other lakes in Thoubal. Kachouphung Lake in Ukhrul is a natural formation of an aqua stretch close to the Khayang Waterfalls.

Ngaloi Falls in and the Khuga Dam in Churachandpur are also simply touristy. The Shirui Kashung Peak of Ukhrul is crowded by a vast stretch of Shirui lilies making a pretty picture during summers. The Buning (N-piulong) meadow in Chandel, with its uneven and undulating meadows merging with the horizon, makes a wonderful sight with bursting blooms of wild lilies and orchids, in summers especially.

Hence, for all that travel can offer, the places in Manipur magnanimously showers more than what one can discern.