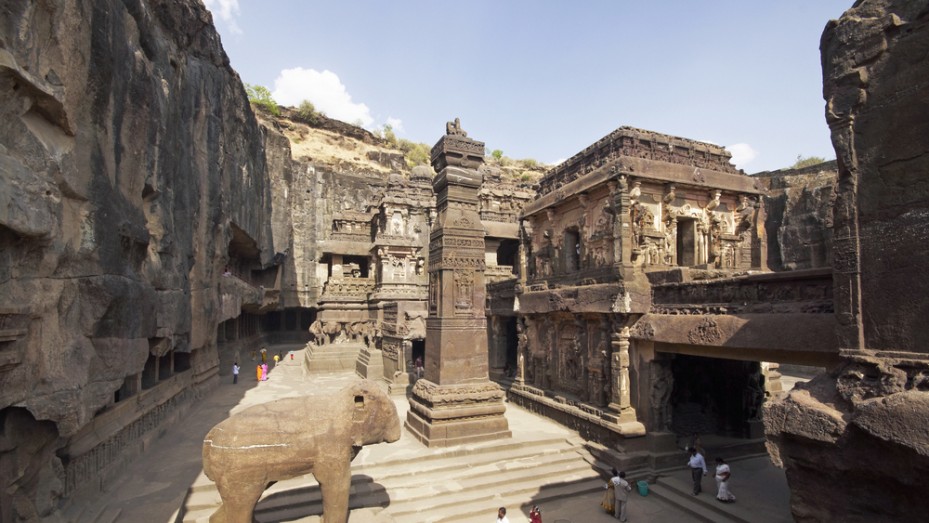 An archaeological site about 30 km away from Aurangabad, the Ellora Caves are listed as a World Heritage Site. It belongs in the state of Maharashtra and is believed to have been carved out and constructed in the beginning by the Rashtrakuta dynasty.

A total of 34 caves, these constructs basically fall under three groups – the Buddhist group, the Hindu group and the Jain group. The Buddhist group consists of the first twelve caves, the Hindu group takes up the next seventeen, while the Jain group has five caves. All the excavations are in close proximity, reflecting the harmony these very religions prevailed with during those times.

Ellora - The World Of Caves - Tourist Places In Ellora

The first set of caves belongs to the Buddhist sect. The Buddhists were the first ones to excavate the Ellora Caves, from around 450 to 700 AD. They carved out 12 caves which were further divided into two groups – Caves 1-5 and Caves 6-12.

The Brahmanical Caves are also popularly called the Hindu caves and their set starts from Cave 13 to Cave 29. There are 17 caves in all and are situated towards the western region. All these caves were built during different periods.

The last set of caves found in Ellora belong to the Jainism sect. They were the last ones to sculpt Jain representations here. The excavation found here is majorly unfinished; they are finely detailed, though nowhere close to the dexterity employed in the Buddhist and Hindu caves at Ellora.

There are a total of five caves under this group – from Cave 30-34.

Another key feature of the all the caves together is a water cistern that is present in each and every cave. Since these caves were inhabited by the monks and disciples in that era, the provision of water came in very handy. They had a keen sense of rainwater harvesting, which they employed to redirect rainwater into the cisterns with the help of strategic cuts in the huge rocks found in the caves.

The caves can be visited anytime during the entire year. The climate is majorly cool and pleasant. However, the summer can become a little overbearing and the heat can make it difficult to explore the place properly since there is quite a bit of walking to do. The rainy season also poses as a good time as the weather makes the river below swell in full bloom and the surrounding temperatures drop from the scorching heat to a much more bearable one.

How To Reach Ellora

As far as travelling is concerned, Aurangabad is the closest point by air, rail and road. The Aurangabad Airport is situated very near the caves and is easily accessible. The railway station of Aurangabad too links itself to Ellora, which is around 45 minutes away. As for the road, the Ellora Caves are closely situated to the Ahmedabad junction, which is about 30 km away. One can opt for an auto ride from there to reach the caves.

An extremely important component of our Indian culture, Ellora Caves come in the top ten places in India worth visiting. Culturally deep and ethnically rooted, explore these caves to get a better insight into the three major religions that revolutionised India and the rest of the world.

Ellora is Famous for

How to Reach Ellora