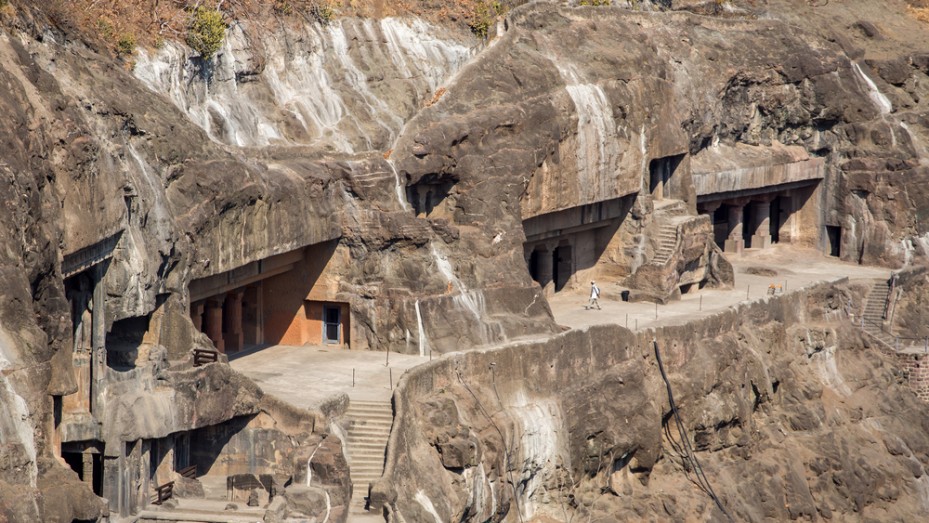 Dating back to as far as the 2nd century BC, the Ajanta Caves is a testimony to the prevalent religions of Hinduism, Buddhism and Jainism that were initiated back then. Declared as a World Heritage Site by UNESCO, the Ajanta Caves, alongside the Ellora Caves are an extremely important historic site found near Aurangabad, a major city in the state of Maharashtra.

The Life Of Buddha - Unravelled

Ajanta is a cluster of close to 30 caves that depict paintings, sculptures and frescos of the three religions. All the walls are a significant window into the periods of the 2nd century BC, followed by the 6th and 7th centuries BC; that was when these gems were first created. All the caves have one thing in common, they bring out true life details of Lord Buddha’s life, before he attained moksh (salvation). They bear a strong resemblance to the Sigiriya Caves found in Sri Lanka.

It is believed that these caves took as much as a mind-blowing 800 years to be completed. Back in the 19th century, a few British soldiers were out hunting when they chanced upon the horseshoe rock. Beguiled, they ventured further, only to discover the huge set of caves hidden by the greenery around them. Immediately, the government was intimated, who sent a team of archaeologists to excavate these wondrous caves.

Next, of what is considered to be truly a shocking phase, stupas, taras, dawarapals, viharas and chaityas of the Buddhist relics, along with several paintings and motifs were unearthed. All the paintings demonstrated a strong influence of Buddhism and revolved around the life of Buddha.

Tourist Places In And Around Ajanta

There are 29 caves in all – each significant in exhibiting a story relating to Lord Buddha’s life. The first cave tourists come across, Cave 1, depicts the period from the 6th century to the 7th century. Essential symbols and paintings line the cave. Down the doorway, one can see the great Buddha image that seems different from different angles. The Nagas are guardians who are drawn on the same principle as the ones in Cave 20. If you look on the upper-left corner, you’ll find a goddess carved out. Representative of Mother Earth, this serene figure also symbolises water.

There also lies a cherubic angelic dwarf that is holding a garland in his hands for Lord Buddha. Beside the great Buddha image, on one side there is Padmapani Avalokiteshvara, who is supposedly holding a lotus, while on the other side there is Vajrapani holding the thunderbolt. Both of them form a part of the bodhisattva. One of the reliefs has four deer sculpted out, different in personality. The catch here is that all the four share a single head. The Lovers depicts the shunning of sexual desire as a taboo, while the Dark Princess is allegedly inspired from a real Princess from Andhra. The Princess Reclining By a Pillar, the Dancing Girl, the Maid in a Sad Mood and the Persian Embassy are other interesting displays you will find in this cave. The pictures of the Golden Geese, the Pink Elephant and a Bull Fight demonstrate how all living beings are, after all, one entity.

Cave 2 is also clearly inspired by Cave 1. Its doorways are influenced from the many ancient temples found in India. The ceiling is intricately designed and decorated exuberantly. The walls inside have an image of a Thousand Buddhas, painted with astonishing detailing. The corridor towards the right shows a puerile girl on a swing – called the Woman on Swing – which highlights Buddha’s thoughts, that physical energy led to illumination.

Cave 4 was made simultaneously with Cave 17, but was left unfinished. There lies a huge number of incomplete paintings from Buddha’s life. A Crouching Deer, Dwarf Musician and Floral Plaster are some of the many things found in this cave.

Cave 6 is representative of the Mahayana period. There lies an image of a seated Buddha, surrounded by flying pairs of couples. The pillars in these caves are much more fine than the earlier caves and are in an octagonal shape. It has the painting of the Bhikshu with a lotus.

Cave 9 accommodates the Chaitya Hall of Gathering. It has a giant horseshoe window. The Naga Worshippers and the Frieze of Animals and Herdsmen are two paintings that can still be seen there.

Cave 10, more or less, resembles Cave 9 in its style and architecture. You have the Shada-Dant Jataka – Buddha incarnated as an elephant. You can also see the depiction of a king with his retinue and the Shyama Jataka. The Princess and Tusk and the Buddha with the One-Eyed Monk are other two paintings that must be checked out. Cave 11 is mainly concerned with indicating the shift from the Hinayana period to the Mahayana period. It bares Buddhist stupas.

Cave 16 has a beautifully made porched doorway that lays the foundation to the other doorways. This particular cave gives a breathtaking view of the river beneath. This cave has the giant Buddha statue, a depiction of Buddha with a Begging Bowl, the Descent of Lord Buddha and Prince Siddhartha (Buddha) stretching a bow. This cave is also home to the world famous art – Dying Princess – that displays the princess’ shock when she gets to know about her husband becoming a monk. The Sutasama Jataka is also another sculpture that is a must see.

Cave 17 shows paintings that symbolise love, like the Apsaras and Flying Spirits and the Indra and the Apsaras. Apsaras mean angels. The Buddha Returns shows how Princess Siddhartha returned as a beggar to reconcile with his wife and children.

Cave 21 is more sensibly devised than the other caves. The area has been used judiciously with well-carved pillars. Paintings that were hung on the walls once upon a time are now replaced by plasters. It contains the Chaitya Hall – an open court that lies close to the verandah. A structure, composed of a series of arches and supported by 26 pillars, is found in here. This wall also has relief sculptures. The verandah has a wall close to it that has the Buddha’s statue on it, albeit in a dead state. Believed to be his sculpture in a sleeping form, the Buddhists claim that Buddha is in his parinirvana here. The same wall that accommodates the Buddha in his parinirvana state also houses a sculpture called the Temptation of Buddha.

Cave 24 consists of 3 components – The Pillar Style, the Pilaster and the Porched Doorway. The pillar styles found in this cave are incomplete, but are noteworthy of its origination. Starting with rough and uneven pillars, it evolved to octagonal pillars with proper finishing, in the Mahayana period. The porch end consists of an elaborately created pilaster. Cave 24 was, however, left incomplete. A later addition in and around the 7th century, the Porched Doorway is in the upper-right corner and is in the shape of a T.

Cave 26 comprises the Sravasti Miracle, Family Group and Buddha Head with Curly Hair. The passage that circumvents the cave is full of carvings depicting the miracles that Buddha performed in his time. Sravasti is a village that is believed to have been lucky to have witnessed the great Buddha present himself in the skies above, in all his forms. The Family Group is the depiction of an ideal family during that time. It has a flowery decoration. Buddha Head With Curly Hair is simply a depiction of the head of Buddha, complete with curly hair and huge ears. Legend has it that Buddha was seated on a lotus that was believed to be the centre of the cosmic universe. The Nagas, Nanda and Anumpananda are the ones that hold the lotus stem. The Chaitya Horseshoe Arch exhibits fantastic images sculpted deftly and dates back to the 5th century.

A Perfect Visit Any Time Of The Year - Ajanta Climate

The Ajanta Caves are unaffected by the prevailing weather conditions. This site can be visited at all times of the year. However, the summer season is advised to be skipped out on, as there is quite a bit of walking to do – an activity that might tire you in the scorching summer heat. The monsoons are, hands down, the best time to visit this fantastic place, as the river right below the caves are in full bloom and the gushing water, combined with the abundant greenery makes for a perfect, memorable experience.

How To Reach Ajanta

The Ajanta Caves are easily accessible by air, road and rail. The Aurangabad Airport, at a distance of 100 km, is the closest airport, if one decides to travel by air. There are also several trains that ply from various cities in India to Aurangabad and Jalgaon – two cities extremely close to the Ajanta Caves. If travelling by road, one can opt from the many bus tour services offered by the State Government Transport or the private bus tours. From Aurangabad, Ajanta Caves is around 2-3 hours away.

These caves are better seen in person than merely read about. The enormity and grandness of this heritage sites makes it one of those few destinations in the world you must visit before you die. Don’t miss on this wonder for anything. The mystical charm of these caves will have you zapped.

Ajanta is Famous for

How to Reach Ajanta