Nativeplanet
»
Travel guide
»Top Things To Do When In Jaisalmer

Top Things To Do When In Jaisalmer 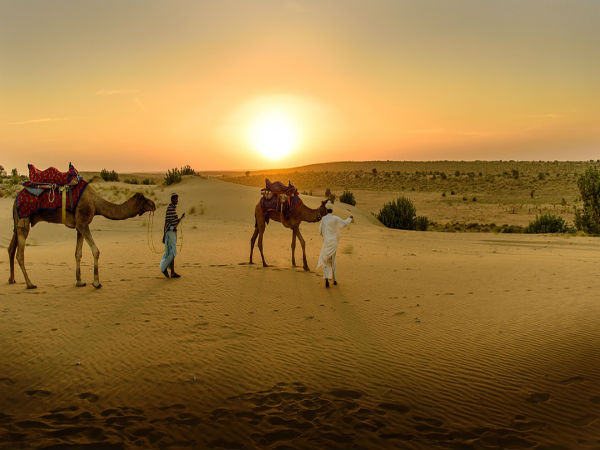 Located at a close proximity to the Pakistan border, Jaisalmer is a major tourist hotspot in the state of Rajasthan. The place is fondly called the Golden City due to the golden sand dunes of the Thar Desert. Jaisalmer is decorated with a large number of lakes, grand Jain temples, havelis and palaces which are constructed out of sandstone in the hues of golden-yellow. Ride atop a camel and take a ride at the desert or camp under the starry sky to create an unforgettable experience.

As winter is coming, if the cold weather is not your cup of tea then there are plenty for you to discover at Jaisalmer. It is relatively less crowded in comparison to the overrated and very popular Udaipur. Well, start packing and get going.

The desert is also home to a very diverse habitat and ecosystem, vegetation, human settlements and fauna which together make it very different from the other deserts of the world. One would find 23 different species of lizards, 25 species of snakes apart from animals and birds, such as peacock, Indian gazelle, black bucks and many more.

Amidst the desert and the dry land, one would come across quite a number of ruined forts and temples. One must not simply drive past these structures, but stop and take a closer look at them.

One such fort to be visited is the Khaba Fort, which overlooks the abandoned village of the Paliwal Brahmins, which is located right at the heart of the desert which evokes an eerie feeling in its visitors.

One might think this is a sweet delicacy. Well think twice before you order it because it is an alcoholic beverage. The kesar kasturi is a local alcohol which is brewed only in the villages of Jaisalmer.

The drink contains 21 local spices, whose recipe and methodology of preparation is a closely guarded secret amongst the localites, which is said to have passed on from one generation to another.

One of the best ways to explore the desert is to hop on a camel safari. The camel is fondly called the ship of the desert and taking a camel safari would give you the opportunity to witness the rustic, rural desert life in the country. While the desert can be barren, it is also equally well populated with many tribal settlements making the place their homes since generations.

Long ago, there used to be a practice: if a man died, his wife was supposed to be burnt alive on her husband's pyre. The ritual was prevalent across many parts of the country until the point when social reformers and freedom fighters challenged the practice and brought an end to this horrific ritual.

As you travel into the Thar Desert, you come across the Sati cremation sites where effigies are built as memorials to these women. The structures stand tall and have stood the test of time to give you a chill down your spine.

Comments
Read more about: travel india nature rajasthan jaisalmer thar desert monuments heritage sites
Other articles published on Nov 3, 2017
We use cookies to ensure that we give you the best experience on our website. This includes cookies from third party social media websites and ad networks. Such third party cookies may track your use on Nativeplanet sites for better rendering. Our partners use cookies to ensure we show you advertising that is relevant to you. If you continue without changing your settings, we'll assume that you are happy to receive all cookies on Nativeplanet website. However, you can change your cookie settings at any time. Learn more
Change Settings Continue