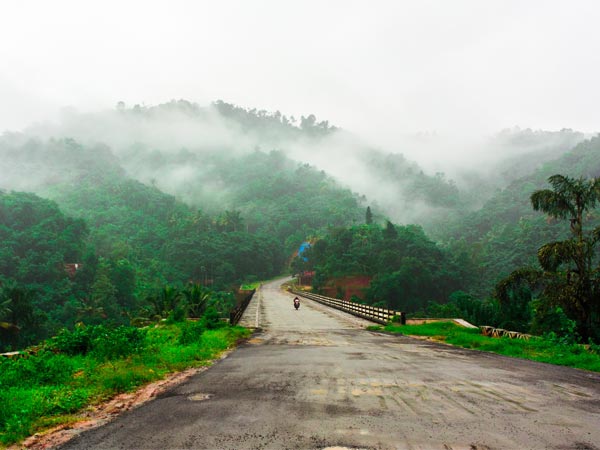 Stunning landscapes, mesmerising hill stations, serene beaches and backwaters makes Kerala God's Own Country. Aptly named for its pristine natural beauty, Kerala is one of the most sought-after destinations for a vacation due to the never-ending number of options for places that the state consists of.

A visit to Kerala will take you through innumerable kinds of landscapes and the pleasantly humid climate of Kerala during winter simply enhances the vacation experience. Take a break this winter and visit these fantastic destinations in Kerala. Take your mind off the routine and just lose yourself at the arms of nature.

South India's most beloved hill station, the ideal time to visit Munnar is between September to May. Going to Munnar in winter means witnessing the pristine hill station right after the monsoon rains have grazed through the town.

This leaves the lush green tea plantations spread across the hills in a mesmerising glow that is bound to make you spellbound. Visit Mattupetty Dam, Pothamedu View Point, Top Station, Echo Point, etc. when in Munnar.

Thrissur upholds the rich culture and heritage of Kerala since it is home to innumerable temples, such as Vadakkumnathan Temple, Paramekkavu Temple, Guruvayur Temple and places like Sangeetha Nadaka Akademi, Kerala Sahitya Academy, etc. Due to this it is fondly called the Cultural Capital of Kerala.

The best time to visit this traditionally rich city is between October to March since the weather is at its best. But you must also visit Thrissur during April or May to witness the boisterous Thrissur Pooram festival.

On the account of being a coastal city, the ideal time to visit Kochi is during winter. This laid-back city of Kerala is a serene place for a vacation, which bears a historic phase with the British, Dutch and Portuguese.

Due to this, you can see beautiful places like the Mattancherry Palace, Fort Kochi, etc., all of which were the influences of their diverse history. Unwind in the Cherai Beach and Marine Drive at Kochi.

The beach town of Kovalam gained significance when it was recognised as an offbeat destination by foreign tourists. It is home to three absolutely picturesque beaches namely Hawah Beach, Samudra Beach and Kovalam Beach that can simply not be missed.

Get an adrenaline rush by trying water sports, such as snorkeling, parasailing, surfing, etc., or simply go beach-hopping while visiting places like the beautiful Halcyon Castle.

Ponmudi is a beautiful hill station that is perched at altitude of 3,600 ft. Literally translating to the Golden Peak, Ponmudi is a part of the Western Ghats ranges of mountain that are set parallel to the Arabian Sea.

This is an ideal hill station for adventure enthusiasts since it serves as a base camp for many trekking trails, such as the hike to Vazhvanthol waterfalls, Bona Falls, Varayattumotta, etc.

Beautiful waterfalls trickling through the thickets of Wayanad's hills, lush greenery and endless stretches of spice plantations are some of the things you can expect in the enchanting district of Wayanad. Explore the Edakkal Caves, trek to the Chembra Peak, witness the beauty of Pookot Lake, Banasura Dam and more on your visit to Wayanad.

The coastal town of Varkala is dotted with hills, beaches, forts and more, making it a fantastic holiday destination. It is known for the natural springs and fisheries, apart from the obvious pristine beauty of nature.

Since Kozhikode, also known as Calicut, used to be one of the main trading points of eastern spices, it was called the City of Spices. Kappad Beach in Kozhikode is said to be the place where Vasco da Gama discovered India and created trade routes. Revel in the backwaters of Kozhikode, visit Thikkoti Lighthouse, Kozhippara Falls, etc., at Kozhikode.

The capital city of Kerala, Thiruvananthapuram, which is commonly known as Trivandrum, is rich with the history of various rulers. Due to the beautiful rolling hills and beaches that the city is home to, it was referred to as the Evergreen City of India by Mahatma Gandhi.

Some of the places you need to visit in Thiruvananthapuram include Kanakakunnu Palace, Neyyar Dam and Sanctuary, Napier Museum, to name a few.

Vagamon is a relatively offbeat hill station that is spread with refreshingly green meadows and is set in a beautiful height of 3600 ft. Set at the fringes of the Western Ghats, Vagamon offers a great spot to try adventure activities like mountaineering, rock climbing or even parasailing.

Visit the Kurisumala Ashram, Ulipooni Wildlife Sanctuary or just unwind on the beautiful meadows and pristine nature of Vagamon.