Kerala – A Potpourri Of Pleasure 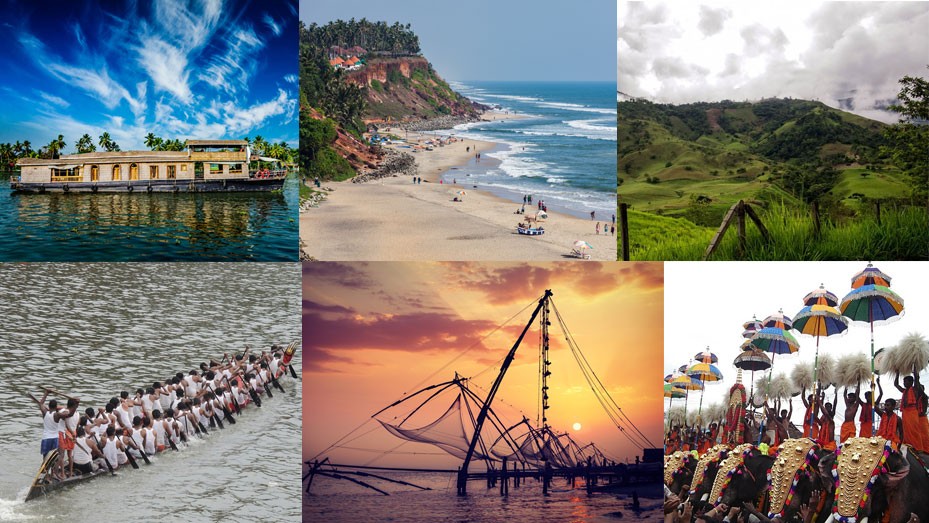 Kerala and tourism are almost synonymous; lush tropical greenery, coconut palms, palm-fringed beaches, pleasant placid backwaters with floating houseboats, numerous temples, the aroma of Ayurveda, languid lakes and lagoons, canals, islands, etc. are some of the undeniable impressions of Kerala and Kerala alone, beckoning those with a wanderlust from across the globe.

It's not a small wonder that the National Geographic Traveller and Travel + Leisure magazines stated it as one of the "ten paradises of the world", "50 must-see destinations of a lifetime" and “one of the 100 great trips for the 21st century”.

Each city, town or the remotest village of this state, crowned as the God's Own Country, has its own tale to tell and are silent invites for those with a keen eye to explore as well as to enjoy. Kerala's fourteen districts, Kasaragod, Kannur, Wayanad, Kozhikode, Malappuram, Palakkad, Thrissur, Ernakulam, Idukki, Kottayam, Alappuzha (Alleppey), Pathanamthitta, Kollam and Thiruvananthapuram being some of the much sought after tourist destinations themselves, encompass numerous others which are travel treats for the discerning ones, who would like to venture into the horizon of tourism.

Kerala tourism sports many shades, be it sandy beaches, blissful backwaters, hill stations clad in beauty, best of nature, innumerable places for the pious; easily assuming itself to suit the traveller's lookout for a simply relaxing and rejuvenating vacation, a fun-filled holiday, an encounter with adventure, a romantic rendezvous or a peaceful pilgrimage.

The magical backwaters of Kerala, include Alappuzha or Alleppey, Kumarakom, Thiruvallam, Kollam, Kasargod, etc., which offer that holiday which one craves to have by the backwaters. Kerala backwaters are dotted by kettuvallams and houseboats; the latter, a more improvised version of the former used as accommodations for travellers, apart from the numerous backwater resorts. The traditional snake boat race performed annually in Kerala attracts a lot of tourists to the state. The snake boat race is a major aspect of Kerala tourism.

Vembanad Lake, Ashtamudi Lake, Pookode Lake, Sasthamkotta Lake, Veeranpuzha Vellayani Lake, Paravur Kayal, Mananchira, etc. are some of the lakes that are impelling aspects of Kerala. Not to forget that the Vembanad Lake is one of the largest lakes in India.

Munnar is a pristine and pure hill station in Kerala, still not in the clasp of commercialisation, when compared to the other hill stations of South India. It is one of the much sought after honeymoon destinations with a romantic air about it, next to Wayanad in the state. Vagamon, Ponmudi, Thekkady, Peermede, etc. are other hill stations that can be explored, with Thekkady also known for its wildlife and wilderness with scope for adventure as well. Kerala tourism, thus, has some mesmerising locations for a holiday tucked away in the lap of its hill stations.

The culture of Kerala which forms an integral part of the Indian culture, is distinct in different aspects of art forms, cuisine, clothing, etc. Kerala is home to a lot of dance forms, theatrical forms, folk art, etc. Kathakali and Mohiniattam are dance forms that boast of worldwide acclaim. Popular dance and theatrical forms also carry religious undertones with Parichamuttu and Chavittu Nadakam of Christians, Oppana of Muslims while Koodiyattam is one among the numerous temple art forms pertaining to Hinduism. Keralites are also well versed in Carnatic music. Keralites also clad themselves in a mundu, which is their traditional attire.

Puttu, idiyappam, unni appam, palada pradhaman (a form of payasam), banana chips, dishes made out of fish, the red rice that is distinctive of Kerala, etc. are some of the delicacies of the state. Sadhya is a term known for a variety of sumptuous dishes prepared and served on a banana leaf. Onam sadhya prepared on Kerala's major festival, Onam, is a special form of an extended sadhya.

Guruvayur Sri Krishna Temple is a popular shrine which opens doors of divinity to devotees across the country. Needless to say, Sabarimala Ayyappan Temple is one of the most popular religious centres of India. Iranikulam Mahadeva Temple in Thrissur, Padmanabhaswamy Temple in Thiruvananthapuram, Thiruvalla Sreevallabha Temple, etc. are some of the most popular shrines in Kerala. Elephants caparisoned during festivals bearing the image of the lord on their backs, moving in a procession is a sight worth seeing which is truly Indian. The numerous temples dotting the state are simply integral parts of Kerala tourism.

The soil of Kerala is further sanctified by the birth of Jagadguru Adi Shankara Bhagavatpada, the expounder of the Advaita Vedanta of Hinduism in Kalady.

Malayattoor Church, St Francis Church in Kochi, Santa Cruz Basilica in Fort Kochi, St. Mary’s Forane Church near Kottayam are some of the prominent churches in Kerala. Pazhayangadi Mosque, Madayi Mosque, Cheraman Juma Masjid, Kanjiramattom Mosque and Malik Dinar Mosque are some of the places of worship in Kerala for those who are firm in their faith in Islam.

So what else could hold one back from visiting Kerala? It has everything to offer, all aspects for a delightful travel.