Take A Look At The Longest Road Tunnels In India 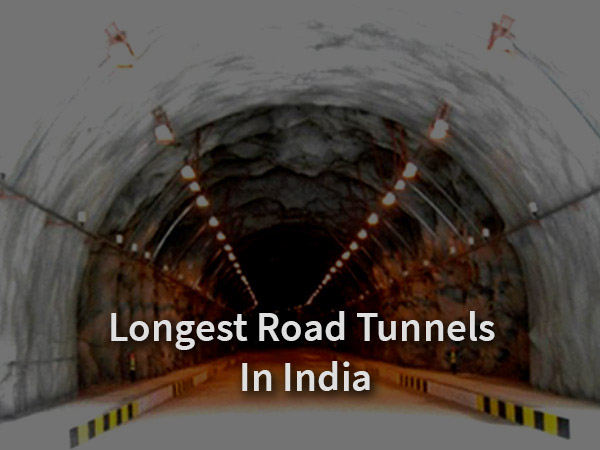 You are on a road trip and if you are approaching a tunnel, it would just increase the level of excitement of the trip and it would give you a thrill and joy to ride through the tunnel. Driving through the underground tunnels is one of most thrilling and exciting experiencesthat would leave anybody spellbound.

India is a country, which known for its large transport network around the world, tunnels and bridges play an important role which helps one to shorten the travel distance.

With gigantic mountain ranges of the country like Aravalis, Vindhyas, Western Ghats and the mighty Himalayas, the tunnels and bridges in these ranges would give an additional thrill to your journey while passing through each of them.

Also Read : 15 Unique Places In India To Be Visited

From the East to West and North to South, they are dug all the way to glory. We bring to you some of the longest road tunnels in India.

A word of caution: It is advisable for the claustrophobics to avoid such tracks.

At a length of 9.2 km, the Nashri tunnel will also find its place in the list of the longest road tunnels in Asia. The underway will help to reduce the distance between Jammu and Srinagar and will also be a solution to the traffic jams on the NH due to heavy snowfalls in winter.

At an altitude of 3978 m, the Rohtang Tunnel would be the World's Highest Road Tunnel. The tunnel has its location beneath the beautiful Rohtang Pass and stretches to 8.8 km. The two-lane mighty tunnel cuts the distance between Manali and Keylong by more than 50 km.

Also known as Banihal tunnel, the Jawahar tunnel lies beneath the Banihal pass. The tunnel passes through numerous scenic spots of the Jammu to Kashmir Valley, which makes it a breathtaking journey.

The tunnel has a total stretch of 2.5 km, and is situated at an elevation of 2194 m and runs from Banihal to Qazigund. It is considered as one of the longest road tunnel projects of the country.

It is one of the longest road tunnels in Maharashtra and is located near Kamshet in Pune. The underway has two tubes and three lanes and lies on the famous Mumbai - Pune Expressway, which happens to be India's first six-lane concrete tolled expressway.

The tunnel runs for almost 2 km, which makes it one of the longest in Maharashtra.

The tunnel is the only entry and exit point in Jaipur from its eastern side. The 2.8 km long tunnel has heritage buildings on both sides and is bored through the Jhalana hills. The tunnel is known for its beautiful lighting from inside and beautiful landscapes views from outside.

The Bhatan Tunnel is marked as one of the highly advanced tunnels in India. With the length of a kilometre, the tunnel is located on the Mumbai - Pune Expressway, the tunnel has various measures to maintain the speed and safety of the commuters.

With six lanes, the tunnel has reduced the travel time between Mumbai and Pune.

Aut tunnel is on the Chandigarh - Manali NH 21, which would take you through a 15-minute journey under the dusky light of the tunnel. Located near the Larji Dam Reservoir, the tunnel has a total length of 3 km and is the only getaway to Kullu - Manali.

Also known as Chenani-Nashri tunnel, it is located at the Udhampur district and is expected to be opened to traffic in mid-2017. It is situated under the Shivalik mountain ranges of the Himalayas and is all set to be the longest road tunnel in India.

Comments
Read more about: travel india adventure kashmir maharashtra
Other articles published on Mar 9, 2017
We use cookies to ensure that we give you the best experience on our website. This includes cookies from third party social media websites and ad networks. Such third party cookies may track your use on Nativeplanet sites for better rendering. Our partners use cookies to ensure we show you advertising that is relevant to you. If you continue without changing your settings, we'll assume that you are happy to receive all cookies on Nativeplanet website. However, you can change your cookie settings at any time. Learn more
Change Settings Continue