Sindhudurg fort in Maharashtra- A place for History, Tourism and Sightseeing 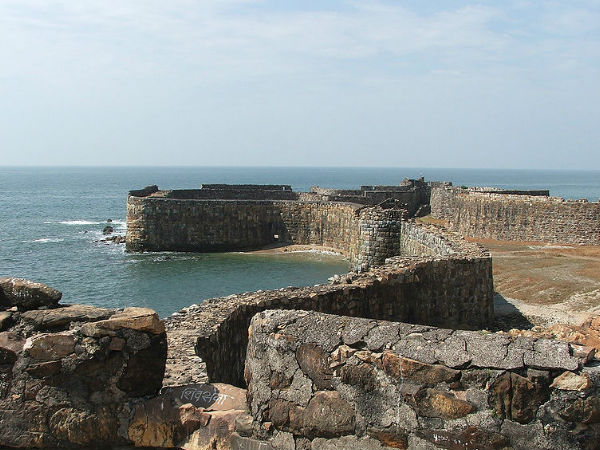 Have you ever seen a mighty fort floating in the blue buzzing sea? Sindhudurg fort in Maharashtra, one among the many forts built by the great Chhatrapati Shivaji, is a fusion of elegance and antiquity. We all have fondness towards one or the other thing in life, it could be movies, games or anything as such. But what the Great Shivaji held dear was the forts. He was well known for his fondness for forts and he was in possession of some 370 forts at the time of his death.

The view of Sindhudurg Fort from the coast

Sindhudurg fortress lies on the shore of Malvan town of Sindhudurg district in the Konkan region of Maharashtra which is 450 kilometres south of Mumbai. The fort lies on a rocky island just off the coast of Malvan which is accessible by a boat from mainland. The district is named after the fort of Sindhudurg which means 'Fort in the Sea'. Sindhudurg has 37 forts, the highest number of forts in Maharashtra as well as all types of forts Jaldurg ( fort on Sea) , Bhuikot (fort on land) and Giri (fort on hilltop).

Sindhudurg fort, located at a small islet surrounded by the boundless Arabian sea, was the main Maratha headquarters to prepare for wars, battles and also to provide security to Maratha people. The fort built on the orders of Shivaji took three years to complete with almost 100 architects from Portugal and a manpower of 3000. The fort is spread over an area of 48 acres with fortified walls, 12 ft thick and 29 ft high, stretch for 2 miles. Over 4000 mounds of iron were used in the casting and foundation stones were firmly laid down in lead.

* Wells that do not parch!? This fort has 3 pretty water reservoirs that do not get dry even during the summer time when rest of the wells in the nearby villages dries up.

*An under water passage in the 16th century?! Underwater passages are still a matter of awe and the brilliant tactician and monarch in Shivaji had made it possible in the 16th century. The fort has a hidden passage in the temple which looks like a water reservoir. This passage goes under the fort for 3 kilometres and 12 kilometres beneath the sea and from there 12 kilometres in to a nearby village which was used as an evacuation pathway for women once the fort is breached.

* The hidden entrance! Unless you are a regular visitor, the entrance gate 'Dilli Darwaja' cannot be seen from anywhere. If an unfamiliar person tried to enter via boat which is the only option apart from air, it is sure that the boat would thwack on the rocks around the fort which again cannot be seen with naked eyes. Hence only people who are familiar with the fort premises would be able to enter the fort. A king with brains and guts!

Along with the architectural brilliance and unique ranks, this fort also has temples inside it dedicated to Goddess Bhavani, Lord Hanuman and Jarimari. Along with these holy shrines, there is also a popular temple which is devoted to Shivaji,the only one of it's kind in the world. There are also hand-prints as well as footprints of Shivaji which have been embedded within the fort on a slab.

Underwater sports are also available for the tourists here.

Sindhudurg is undoubtedly an unparalleled and unique fort on various dimensions. That's what makes a trip to Sindhudurg fortress remarkable.

How to reach: Sindhudurg district's bus stand is well connected to all major cities in India via government operated buses. From there, direct buses are available to reach Malvan Jetty.

Accommodation : Since Sindhudurg is a major tourist attraction, hotels are available in and around Malvan town.

Entry fee and timings : You can visit the fort everyday during day time from 10 am to 5:30 pm. The entry fee for Indian tourists is 50 per person while for tourists from outside India, it is 200 per person.