7 Places To Visit In The Pine Clad Valleys Of Dalhousie 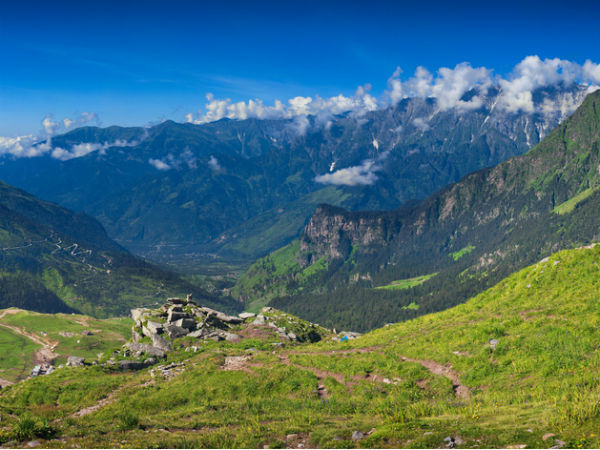 Nestled in the tranquil hills, Dalhousie is a popular hill station town in Chamba district of Himachal Pradesh. This pristine summer retreat was established by and named after the British Governor General, Lord Dalhousie. Surrounded by lush coniferous forests and perched at an elevation of 2000 m above sea level, Dalhousie is a gateway to the ancient Chamba Valley.

Dalhousie is a popular choice for most travellers and tourists given its pleasant weather and serene beauty. Visited throughout the year, summer and winter are the peak tourist seasons in Dalhousie. This cantonment town also boasts of its stunning Scottish and Victorian styled bungalows and churches seamlessly blending with ancient Hindu temples.

Dalhousie also has a historical significance and one will find ample remnants of the bygone era in this cantonment town. The neatly planned streets and structured colonial buildings and several monuments establish a connection with the British period and significant historical figures like Subhash Chandra Bose and Shaheed Bhagat Singh.

Dalhousie does not have an airport. However, the nearest airports are Gaggal Airport (Dharamsala) at a distance of 106 km and Satwari Airport (Jammu) at a distance of 170 km. The nearest railhead is at Pathankot that is 80 km away and which is well-connected to Delhi. Dharamsala & Chamba are other major tourist places that have regular bus services to and from Dalhousie.

Here's a list of seven best places you can visit when in Dalhousie.

Named after the renowned freedom fighter Subash Chandra Bose, the Subhash Baoli is located a kilometre away from the Gandhi Chowk in Dalhousie. Surrounded by tall pine trees, the place offers stunning views of the mountains and lush valleys. With its appealing vistas, it is one of the most beautiful places to visit in Dalhousie.

The place has a perennial spring and accordingly to historical facts, Subhash Chandra Bose used to visit the place for meditation. The spring water is also believed to have medicinal values. The place also exhibits a beautiful waterfall which cascades down into a glacial stream.

Located in Gandhi Chowk, the St. John's Church is at a distance of around 2 km from the main bus stand. Known to be one of the oldest churches in town, this religious place was established during the British period. This also makes it one of the most historically significant places in Dalhousie.

Surrounded by tall pine trees, the church is built amid a serene landscape. The St. John's Church is also famous for its beautiful architecture and design. All the factors put together makes it not just a beautiful place to visit and worship but also a photographer's delight.

These springs come together to form the majestic Satdhara falls. The springs are also known to contain minerals that have therapeutic values. Many visitors take a dip in the natural pool beneath the falls. Visitors often stroll around the waterfalls to witness stunning views of the snow-capped mountains and lush valleys.

Further ahead from the Satdhara Falls, Panchpulla is another refreshing waterfall site in Dalhousie. Surrounded by lush deodar and pine forests, Panchpulla meaning five bridges, is a waterfall where five streams come together flaunting a magnificent view. The falls is most popularly visited during monsoon and summer.

The falls can be reached by cab or bus, however, most people prefer walking in the serene landscape. A number of restaurants are set up around the place where one can try the local cuisine. Panchpulla also has a memorial built nearby, which is dedicated to Sardar Ajit Singh, uncle of Martyr Bhagat Singh.

Located at a distance of 5 km from Dalhousie are the serene hills of Bakrota. The Ganji Pahari or bald hill, as it means on translation, is situated in the Bakrota Hills. The place is called so because of its bald patch, void of any trees.

Tiny white flowers carpet the Bakrota Hills in spring and the peak is bejeweled with glistening snow during winter. Ganji Pahari can be visited during any time of the year. It is an hour-long, pleasant walk from Dalhousie and is one of the most popular walks around Dalhousie.

At an altitude of 2745 m, the passage of the wind through the woods at Dainkund Peak creates a musical symphony, which is why it is famously known as 'singing hill'. The enticing views of the valley from the summit makes it a favoured spot for adventure seekers and trekkers. The peak area is controlled by Indian Air Force and hence is inaccessible without a proper permit.

The Dainkund Peak is located at around 12 km Southeast of Dalhousie. The peak has a unique temple that is void of any idol. With only a trident in its premise, the temple is dedicated to Pholani Devi, who is believed to be an incarnation of goddess Kali and saved the villagers by slaying the witches in the forests.

Located in the Chamba district, the Kalatop Wildlife Sanctuary is an alluring high altitude forest surrounded by silver fir and thick oak trees. Situated 15 km Northeast of Dalhousie, the forest is home to a myriad of exotic flora and fauna.

The region is enveloped with lush coniferous forests and has the charming Ravi river flowing in its vicinity. Kalatop Wildlife Sanctuary is a must visit place for the nature lovers and wildlife enthusiasts. The sanctuary can be visited throughout the year, however, monsoon is to be avoided.