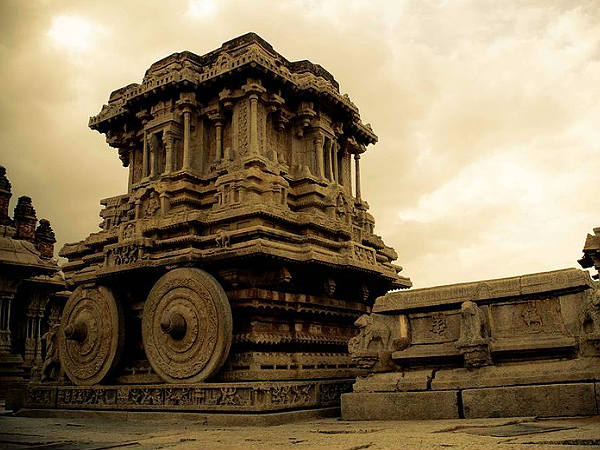 Have you ever visited places which sing a song only you can hear? A footstep in an ancient temple, a touch of an elegant pillar, the sight of a colossal building, the scent of the past, the colours of earth, a sense of familiarity?

Alright, the drama apart. I'm sure you can recollect many moments of tranquility that belong to you and you alone. Such places remain in your heart's memory for a long time to come. Karnataka offers such places in abundance! Here are the historical monuments of Karnataka that is sure to resound in the depths of your being like no other...

Known today as Haal Hampe in Kannada - the city in ruins is the face of Karnataka Tourism! The group of monuments at Hampi is listed under the prestigious UNESCO World Heritage Sites. Hampi was the former capital city of the mighty Vijayanagara Empire. The Virupaksha and Vittala temples are some of the popular structures here among many.

Formerly known as Vatapi when declared the capital city of Badami Chalukyas, Badami is now part of the Bagalkot district in Karnataka. Cave temples, shivalayas, fort and museum attract several tourists. Hinduism, Buddhism and Jainism seem to have thrived around here. There's also a dargah, an Islamic place of worship, to the south of the fort. The sandstone cave temples have laborious inscriptions that include an 18 armed Nataraja in 81 dancing positions.

The regal capital of the great Hoysala Empire, Halebidu was earlier known as Dwarasamudra. The Hoysaleshwara temple is the only remnant of the past fame and glory! Carved out of black soapstone, the sculptures are so delicate and beautiful that no one has ever walked out uninspired.

Hearts melt and cry at the very thought of the fall of a formidable empire such as the Hoysalas. The intricate workmanship at Belur Chennakeshava temple showcases several sequential narrations of Hindu mythology. The carvings are full of life and vigour. The guides'-favourite is the remarkable sculpting of darpana-sundari (the lady with the mirror). As you gaze at the minute details, you'll be lost in irrevocable history.

Being the first capital of the Badami Chalukyas, Aihole was the base of experimental architecture starting from the 5th century. With aesthetic sensibility strange to later periods of temple Architecture, Aihole is the abode of an astounding 125 temples divided into 22 groups. Hence, it is rightly titled the "cradle of temple architecture". A walk around the village along the banks of river Malaprabha is sure to inspire more than just joy!

This star-shaped wonder with triple towers poses as a wholesome fragment of keen lyricism. That is the magnificence of Somnathpura for you. Lying in close proximity to Mysore, the Somnathpura Chennakeshava temple is yet another example of the magic created by Hoysala architecture.

The grand pillars and doorways define the Gadag style of architecture patronized by the Chalukyas. Over a 50 temples were built here between 1050 and 1200 CE. Swaraswathi, Someshwara and Rameshwara temples are the highlight of the city. The famous Kannada poet Kumara Vyasa composed his acclaimed work on Mahabharata right here in the Veeranarayana temple.

The Mahadeva temple at Itagi in Koppal district hints the fact that Chalukyan architecture knows no bounds. The inscriptions found inside the temple flaunt stating to be the "emperor among temples". The other temples in Koppal include Amriteshwara temple, Kashivishveshwara temple and Doddabasappa temple.

Once a capital of the Gangas, Kolar is now the Eastern Gateway to Karnataka for it borders both Tamil Nadu and Andhra Pradesh. The Kolaramma and Someshwara temples in Kolar speak high of its history. The Kolaramma temple has a hundi dug deep into earth and every visitor till today puts a coin into it which resounds the music of the coins of yesteryears. The Someshwara temple on the other hand is said to closely resemble the one at Bangalore. Kolar, on the whole, is a soulful treasure.

Comments
Read more about: historical monuments architecture heritage sites karnataka hampi belur halebid
Other articles published on Oct 10, 2013
We use cookies to ensure that we give you the best experience on our website. This includes cookies from third party social media websites and ad networks. Such third party cookies may track your use on Nativeplanet sites for better rendering. Our partners use cookies to ensure we show you advertising that is relevant to you. If you continue without changing your settings, we'll assume that you are happy to receive all cookies on Nativeplanet website. However, you can change your cookie settings at any time. Learn more
Change Settings Continue