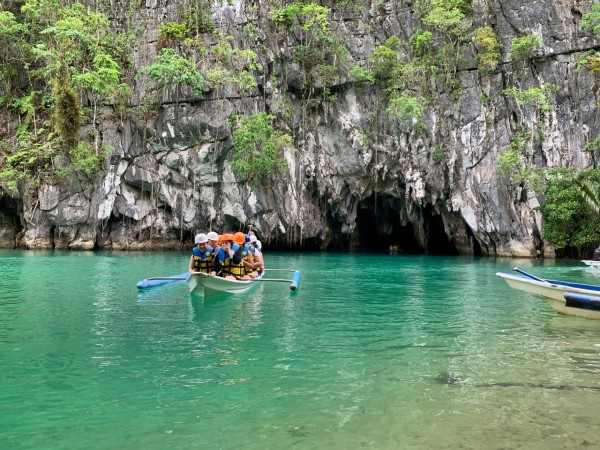 The Philippines' most significant protected area is the Puerto Princesa Subterranean River National Park (PPSRNP). It has one of the most intricate cave systems and stunning karst or limestone terrain. It has one of the longest underground rivers in the world that travels five miles through a network of underground caverns before emptying into the sea. You will find karsts, which are naturally occurring rock formations made by limestone eroding into rock, looming in every direction inside the Puerto Princesa Underground River.

The river's bottom portion is brackish and subject to the ebb and flow of the ocean. It is a noteworthy natural phenomenon because of the direct underground river connection to the ocean and the resulting tidal influence. (Up until the 2007 discoveries of an underground river in Mexico's Yucatan Peninsula, the Puerto Princesa Subterranean River was thought to be the longest underground river in the world.) The area is home to one of Asia's most major forest reserves and includes a complete mountain-to-sea ecology.

Take a boat journey into the underground river at the Puerto Princesa Subterranean River National Park to see the unusual subsurface waterfalls and crystal-lined cave walls. The caverns' interiors include stalactites and stalagmites as well as a number of sizable open cave halls. Among these is Italian's Chamber, one of the world's largest cave chambers at 360 meters in length.

In addition to the cave tour, you may take a 20-minute boat trip through stunningly magnificent limestone karst landscapes. When you get there, you can swim and snorkel off the immaculate white-sand beaches.

The best way to view the caves is from a boat departing from Sabang, and numerous private tour companies arrange trips. You can also make reservations on the official tourism website. The number of licenses issued each day is limited, and it's not unusual for all permits to have been issued up to a week in advance. Make careful you reserve your permits early because at busy times they can all be reserved up to a month in advance.

The Puerto Princesa Underground River was included in the UNESCO list of World Heritage Sites in 1999. It includes one of the largest cave systems in the world, beautiful limestone karst landscapes, unspoiled natural beauty, unaltered old-growth forests, and unusual species, according to UNESCO. To place the Puerto Princesa Subterranean River on the list of World Heritage Sites, UNESCO also took into account the fact that it is a worldwide significant ecosystem for the preservation of biodiversity.

In addition to being a World Heritage Site, the Puerto Princesa Subterranean River National Park is one of nature's seven wonders. It was designated a Ramsar Wetland Site in 2012. Under the Ramsar Convention, an international environmental agreement created by UNESCO, a Ramsar Site is a wetland site that has been classified as being of international importance.

It was added to the 2007 initiative's list of the New Seven Wonders of Nature, which was intended to compile a list of seven natural wonders picked by the public in a global referendum.