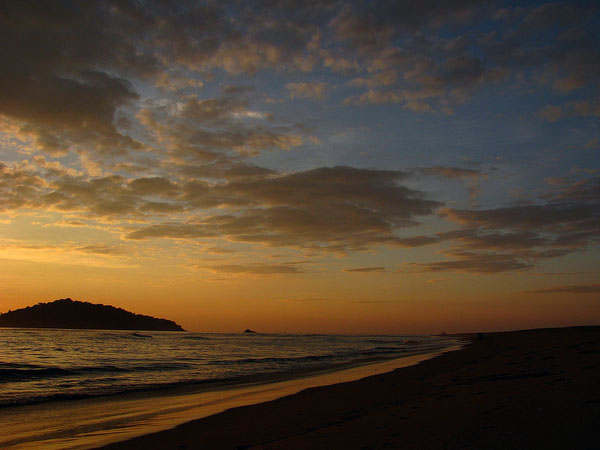 Karwar with its natural harbour, pristine beaches, coconut palms, nearby islands and rivers is a great destination for a relaxing vacation in Karnataka. Situated amidst the scenic trails of western India, the city of Karwar is popular in the region for its agricultural produce. Well-irrigated by the waters from River Kali, the greenery of the surrounding regions is indeed mesmerising.

As Karwar gains popularity for being a fishing and industrial hub, it has also scored points on the tourism opportunities the city offers. There are many places to see or ideal spots to spend a lazy evening. You can drive through the surrounding greenery of Karwar and enjoy the sights of paddy and rice growing or visit the nearby fort, spend the evening watching the sunset at the beach and head over to one of the popular restaurants for a delicious dinner. Indeed, Karwar has much to offer, take a look!

The little island of the coast is among the popular places to visit in Karwar and also boasts of one of the most idyllic beaches, the Devbagh Beach. Boats are available to the island from the Kodibagh Jetty. The beach is clean and less crowded, making it perfect for a relaxing day. The surrounding parts of the Island is also worth exploring. Don't miss out on taking a guided trip across the island and enjoy its many attractions such as mangroves, dolphin sightings, water sports, bird-watching and of course the vivid sunsets!

An interesting place for all those seeking to learn more about India's history in defence and maritime operations, the Warship Museum is located on the Rabindranath Tagore beach along the national highway. A former missile war vessel is now the museum itself and visitors can take a peak into how the machinery worked, where naval staff had to stay on the vessel and understand the difficulties of war. A general video on the Indian Army is also shown. It is open from 10:00 am to 6:00 pm.

A popular place to visit in Karwar is the clean and mesmerising stretch of Rabindranath Tagore Beach. This peaceful beach got its name from the writings of Tagore, who describes this place to be immensely beautiful. It is great for early morning and evening walks. Best avoided during noon, as the temperatures soar. Also visit the nearby INS Chapel and Warship Museum.

An exciting place to visit in Karwar is the Kurumgad Island, like the Devbagh Island, you can also find stay options here. The place is considered to be more pocket friendly with adventurous stay options such as tents. Things you must try here are the nature walks, dolphin sighting, water sports and enjoying the beach as the sun sets.

Tourists visiting Karwar also look forward to visiting the place of Lord Hanuman or the Maruti Temple. The white temple is famous for the calmness and peace it exudes. The main idol of Lord Hanuman is interestingly dressed for various occasions and rituals, making the 'darshan' beautiful.

A less explored tourist place to visit in Karwar is the Oyster Rock island and lighthouse. Named by the Britishers after the numerous oysters found in the island region, the place can only be approached by motorboats and offers an exciting option for one-day trip and picnic. Stay and food options are limited so be sure to carry along eatables from the city.

Located on the banks of the river Kali is an old fortified site that was choosen as the place for the Sadashivgad Fort. Built by the rulers of the Sonda Kingdom, the fort has changed many hands. Briefly in the control of the Portuguese, the Maratha rule and the British to name a few. The fort is largely in ruins, and the rocky hill has a bridge passing through it. As you drive towards the bridge, the large rock face on either side provides a magnificent entry to Karwar city.

One of the popular sightseeing places in Karwar is the Kali river estuary. While the bridge passing over the river provides scenic views, the river itself is very attractive and has small pockets of water that you can go down to. The river joins the Arabian Sea at Karwar.

Food and Stay in Karwar

Karwar has many restaurants catering to a variety of cuisines, both vegetarian and non-vegetarian. If you love seafood, then Karwar is the place to be. The local restaurant Amruth has a lip-smacking variety of seafood dishes ranging from crabs to shell-fish. Try the black salmon masala fry and the crab masala fry that are sure to send your taste buds into overdrive!

For the best hotel deals in Karwar, click here.

How to reach Karwar

By Road: Karwar is well-connected by both national and state highways such as NH-4 and SH-94. You can easily drive from Goa, the closest place in Goa being Canacona at a distance of 38 km. Other nearby destinations are Mangalore (269 km), Shimoga (249 km) and Bangalore (546 km). Regular buses, both private and state-owned are available from major towns across the state and neighbouring regions.

By Rail: Karwar Railway Station is connected to all regions in Karnataka. It also has trains connecting to major destinations such as Delhi, Mumbai, Chennai. Coimbatore, Ahmedabad, Jaipur, etc.

By Air: The nearest international airport is located at a distance of 97 km in Dabolim, Goa. It has regular flights to all major destinations.