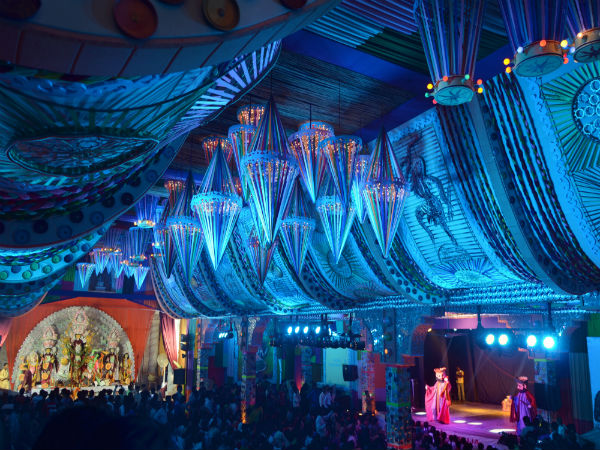 Durga Pujo is just around the corner; it is one of India's most auspicious and holiest festival which is celebrated in grandeur all across the country. Kolkata in particular is home to some of the most beautiful puja pandals in the country.

While West Bengal is the undisputed winner when it comes to celebrations, the cities of Bengaluru, Mumbai and Delhi try to put up their best when comes to organising the festival.There are several committees which set-up massive pandals and host a number of cultural activities to celebrate Durga Pujo in all its glory.

Durga Pujo celebrates Goddess Durga's victory over the demon Mahishasura. She is one of the most respected deities who is worshipped by millions with a lot of love and fear. The main puja to the goddess is offered on from the 5th day of Navratri until the final day of the festival, which are called Shashthi, Saptami, Ashtami, Navami and Dashami.

The festival falls on the lunar fortnight of the Ashvin month in the Hindu calendar; the dates of the Durga Pujo this year are from September 26th to 30th 2017. One city which is well known for its pandals outside West Bengal is Delhi. Have a look at some of the well-known pandals in the city and make sure you visit them.

Fondly called the mini Bengal of Delhi, Chittaranjan Park is the home away from home for every Bengali. The area has four pandals, where organisers have been at it for more than 37 odd years and each year the festival just gets better and better, with food stalls and music band performances that grab the attention of every visitor who would turn up in the best traditional attires.

Arguably one of the most popular pandals in the city, the puja here is the most authentic example of the Bengali culture.

Like most other pandals, one would come across yummy bhog around mid-noon and numerous other food stalls to the delight of the visitors. Make sure you reach the place during the time the bhog is served and you won't be disappointed.

Delhi Durga Puja Samiti which is commonly known as the Kashmere Gate Durga Puja is the oldest pandal in Delhi. The puja is organised in the grounds of the Bengali Senior Secondary School on Alipur Road.

The pandal attempts to be as close to the traditional celebrations, with its classical design and decorations in gold and silver. The idol transports you to a bygone era.

A tradition which is observed here is the organisers take the idol for immersion on a bullock cart which attracts thousands of devotees.

The Minto Road pandal is well known for its pushpanjli or the ritual of offering flowers to the goddess amidst the chants of mantras and is also equally well known for its Dhunuchi Naach, a traditional dance form which is performed during the festival. The pandal is also considered as one of the oldest pandals in the city which has been organised for more than 75 years.

Yet another old pandal which is organised in the city by the Matri Mandir Samity. The organisers bring artistes from Kolkata to sculpt the idol of the goddess.

A unique feature of the pandal is that every year the place is modelled after a well-known temple in the country. The decorations and the overall ambience of the place is a major draw here along with the gorgeous idol of Durga Devi.