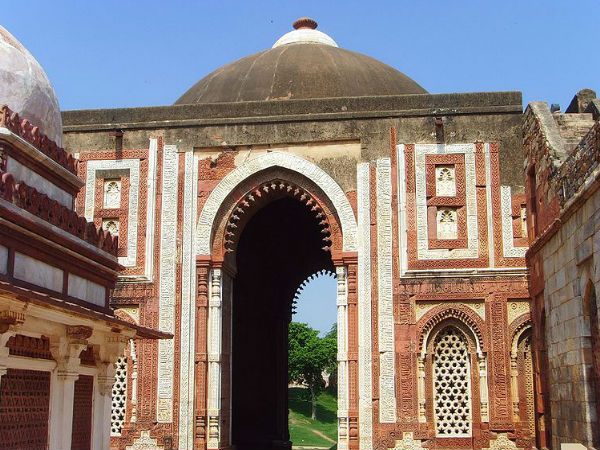 Monuments always attract a lot of tourists and specially if you are inclined towards history, art and architecture; monuments are the best attractions to be visited. India has a lot of monuments constructed using several themes and architectural styles. Let's have a glimpse at some of these monuments built using the Islamic architecture.

Let's take a look at these amazing monuments in Delhi, the capital city of India!

Located in the Qutub Minar Complex, Alai Darwaza is one of the spectacular monuments built by Alauddin Khilji. The first ever building in India that has the Islamic style of architecture; this building is constructed using red sandstone embellished with white marble. You may find inscriptions of Nashk script on the walls of Alai Darwaza. You may also get to see the fringes and beautiful arches that looks like lotus buds which adds to the beauty of this monument.

The moment you hear the word Delhi, you associate it with the magnificent Red Fort. A building that is of a significance of Mughal rule in India was built by Shah Jahan. The whole building is made of red sand stones and has some intricate calligraphy and flower art work on the walls of this huge octagonal building which consumed almost a decade to be completed.

Another tall and spectacular building that calls for a visit in Delhi is the Qutub Minar. A building that has five storeys balconies has been built by three different rulers and the different styles are clearly visible in the architecture of the building. The tower is 73 mt high and it would not be an exaggeration if we call it an example of an ancient skyscraper. Since the building was built during the rule of three different rulers, the first three storeys are made of red sandstone while the last two are built using marble and sandstone.

A mausoleum dedicated to Safdarjung is the last garden tomb in the city of Delhi. This is one of the must-visit monument during your visit to Delhi. The monument has spacious walkways and the tomb is made of white marble while the building is made up of red sandstone. The monument also has a lot of canopies and since it is one of the garden tombs you get to see ponds and fountains as well.

Built using the red sandstone, this octagonal and high central arch monument is one of the classic examples of the Persian architecture and is one of the first garden tomb that was built eight years after Humayun's death. You get to see pools linked by channels and the entrances are to the south and west. One of the major component of Mughal architecture has been derived by this amazing monument.

This monument is located in the same complex where the Humayun tomb is situated and this is a classic example of the sunken garden style of tombs. This is dedicated to the Nobel Isa Khan and this tomb is beautified with varnished tiles, verandahs and lattice windows. Do not forget to visit this place during your visit to Delhi.

Do not be surprised if these monuments will leave you stunned!