5 Most Overrated Tourist Places In India 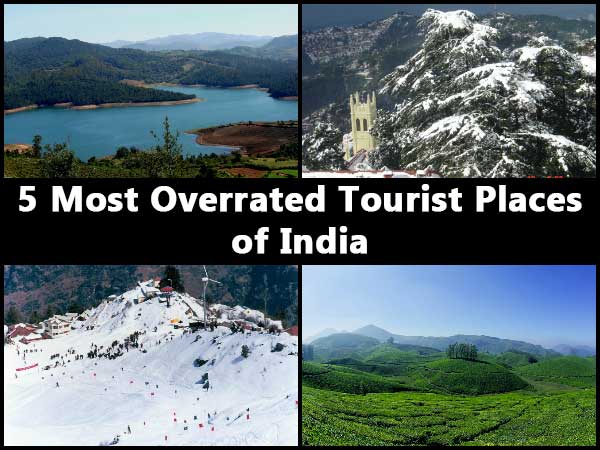 India is a country with ample places to look around and explore; it is a land with many paradoxes. Some places have been visited and revisited by tourists, while a few others are simply overrated. Due to commercialisation and other reasons, the true ethos of many places have been lost.

Tour operators or tourism boards would never tell you this, there are plenty of incredibly popular places that would actually look good only in the films and nothing close to it in reality. It is a matter of perspective, why you get attracted to a particular place.

To save you the trouble and your money, we have compiled a list of destinations which have been overrated and their alternatives as well.

So, here is a list of 5 most overrated tourist places in India and where you could go instead.

Shimla was once a paradise to one who sought peace and a place to calm oneself from the maddening buzz of the hectic city life, but this has become history. Infested with the tourists from around the country which have led to rapid commercialisation, Shimla has been robbed away of its status.

How To Reach Shimla?

Auli is known for its ski resorts and the natural surroundings. It is wrapped by the snow-covered peaks of the Himalayas, giving you a breathtaking view of India's second highest peak - Nanda Devi. It's also home to the world's highest artificial lake named Auli. A holiday which would truly boost your spirits high.

How To Reach Auli?

The heavy inflow of tourists, vanishing landscapes, the ever present Mall Road has contributed to vanishing splendour of Mussoorie. There is pretty much nothing left to see except for Kempty Falls, which is close-by and a walk in the market.

The towering mountainous ranges of Chakrata offer several adventurous activities. This mystical hill station showcases some of the ravishing waterfalls that are enough to entice the weary souls.

The Taj Mahal is beautiful to look at it, but it is crowded and unfulfilling. The iconic landmark is surrounded by filthy and unkept surroundings. The monument has also begun to lose it charm, it was made of pure white marble, but the increase in pollution and the amount of toxic waste which is being released into the Yamuna, has made the Taj Mahal lose its beauty.

Know About The Mini Taj Mahal

Visit The Golden Temple Instead

A visit to the temple is something one would never forget. Located in Punjab, the Golden temple is considered as the holiest shrine of the Sikhs. Surrounded by water, the temple in gold creates a reflection in the pool. Here people welcome you with open arms to join them in the meal being served to all the visitors every day which is absolutely free of cost and equally delicious.

Infested with tourists from across the globe, this place has also fallen victim to the rampant commercialisation. As a result, the place is very unkept, there is pretty much nothing to see apart from the Botanical Garden which is crowded even at twilight, the unclean lake, the Nilgiri Mountain Railway which found its place in UNSECO's list of World Heritage Sites.

How To Reach Ooty?

The true natural beauty lies here, located at a distance of about 25 kms away from Ooty, is this beauty. The place boasts about its share of tea plantations, various places which offer you spectacular viewpoints. Coonoor hasn't yet fallen prey to the rapid commercialisation, unlike Ooty.

The beauty of Munnar lies in its tea gardens and the misty mountains. Once you have had enough of these there is pretty much nothing else to do. To add on, the accommodations are forever overpriced and could easily burn a hole in your pocket, thanks to the never-ending flow of tourists to this much-famed place.

Dream Trip From Coimbatore To Munnar

Wayanad is an ideal place for a weekend getaway. With its mountains dressed with mist, and rivers flowing across the mountains, the place would sure wipe you off your feet. One could see the elephants at the Muthanga Wildlife Sanctuary and have a dip in the Soochipara Waterfalls. Or simply drive down the much famed Thamarassery Ghat and also have hot authentic Kerala breakfast from the roadside eateries.

Comments
Read more about: unique travel ideas munnar shimla ooty travel india
Other articles published on Feb 14, 2017
We use cookies to ensure that we give you the best experience on our website. This includes cookies from third party social media websites and ad networks. Such third party cookies may track your use on Nativeplanet sites for better rendering. Our partners use cookies to ensure we show you advertising that is relevant to you. If you continue without changing your settings, we'll assume that you are happy to receive all cookies on Nativeplanet website. However, you can change your cookie settings at any time. Learn more
Change Settings Continue