Fort of the 'Pepper Queen'! 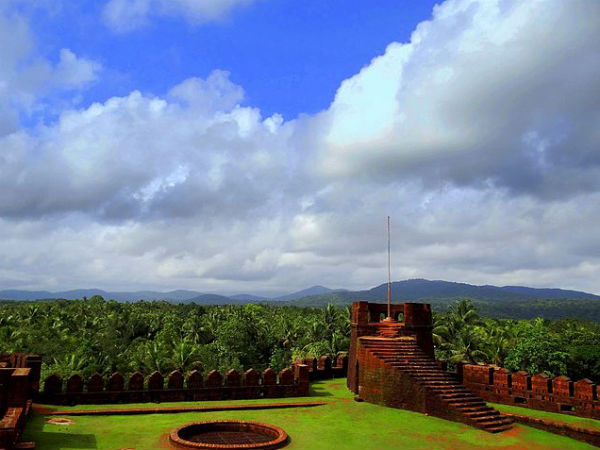 Hit the offbeaten track from Gokarna to meet a 'small wonder'! This 'small wonder' is a hamlet called Mirjan in the interiors of North Canara (Uttara Karnataka). What seems to be a tranquil place today was once a busy port. You will not only be surprised to see this enchanting place but also to hear about its jubilant history.

Mirjan on the banks of Aghanashini River played a significant role during the reign of Vijayanagara Empire. It was the place of the Queen Chennabhairadevi who handled the 'spice trade'; spices like pepper, nutmeg, saltpetre and betel nut were the major exports of this region.

Okay, let us stop the history for a while and see where this queen lived!

'The Pepper Queen' lived in a castle called Mirjan Fort near Kumta. Yes, this 16th century fortress is one of the heritage structures of this region. Tucked away in the lap of nature, this fort is worth a visit.

What Can You See in Mirjan Fort?

Thanks to the efforts of ASI, the restoration efforts are in full swing. Some parts of the fort has been revamped. The huge bastions along with the watchtower comes into picture as we reach the place. Earlier, the fort was surrounded by a moat which was connected to a water channel. Unfortunately, the moat is not visible and is hidden under the overgrown bushes.

Mirjan Fort is spread across an area of 10 acres and many parts of the fort has vanished over time. However, we can still see the big entrance, wells, flag-pole, watch tower, remains of an assembly hall, rooms and idols of gods under a big tree. There are 4 entrances to the fort but only one entrance is accessible now.

By far, the wells and interlinking passages are the most interesting parts of this fort. Yes, the water storage system and large wells which were connected to canals tell us about the source of water inside the castle.

Interlinking underground passages which were used to escape invasions and inner walls depict the levels of security which was provided for the fort. You can also enjoy the scenic views of Agahanashini River flowing around the fort.

Overall, Mirjan Fort is a 'hidden wonder' for sure! In fact, it looks like a fairytale castle when covered by greenish algae during the monsoon and post-monsoon season. A trip to Mirjan Fort is definitely rejuvenating and worthwhile.

So, what are you waiting for? Don't miss out on exploring this age-old heritage. It is one of the best offbeat places to visit in Karnataka.

How to Reach Mirjan Fort

The town of Kumta is well-connected to the other parts of the state. Tourists can take KSRTC buses from major cities like Bengaluru, Mangalore, Dharwad and Hubli to Kumta. Later, local transports like auto rickshaws and local buses can be taken to reach Kumta. A road trip is also a good idea as you can experience the countryside of North Canara!