Meteora Greece: Monasteries Which Are Suspended In Air 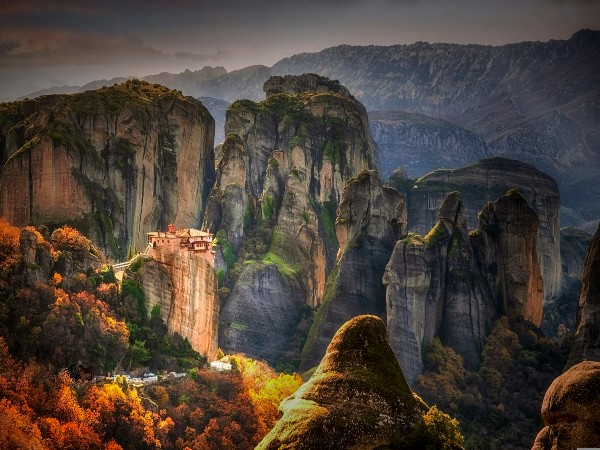 A remarkable collection of monasteries known as Meteora are situated in a stunning natural setting, high atop Greek mountains in Thessaly, Greece. Actually, the word "Meteora" means "suspended in the air" in Greek. This group of sandstone rock pillars that have historically been used as places of worship.

The Meteora rocks, which have an average elevation of 313 meters (1027 feet) and are home to 24 monasteries, six of which are still operational, rise boldly in the middle of a breathtakingly magnificent Greek environment. Meteora, which was included in the UNESCO World Heritage List in 1988, draws tens of thousands of visitors to the area every year.

The monasteries are situated in the valley of the Pineiós River, north of the little town of Kalambáka, south of the town of Kastraki, and east of the Pindus Mountains. The sandstone megaliths, some of which reach 1,800 feet in height, on which the monasteries were constructed rise high above the Thessalian plain (550 meters). The granite masses were created some 60 million years ago, with earthquakes, rain, and wind gradually sculpting their unique and varied features.

The history of Meteora dates back many centuries. Theories on the origin of this natural occurrence link it to geological processes that took place across several geological eras. These pillars are thought to have formed during the Tertiary Period, some 60 million years ago. The region was once submerged in water, but a series of earth movements forced the seabed to recede. Strong winds and waves continued to batter the mountains after they were gone, and when combined with the severe weather, this altered the shape of the mountains. Sandstone and conglomerate were used to create the pillars for this reason.

Monks were inspired to build monasteries on top of these rocks during the Byzantine period to be nearer to God. Around the eleventh century, monasteries were first built in Meteora. The first ascetic state was formally created in the 12th century, and as their place of worship, they built a church dedicated to the Mother of God. Hermits used these occasions to talk about their issues and share ideas about their ascetic life there. Hence, the activities in this church were not just tied to worshipping God.

Monasteries, however, were not created until the 14th century, when the monks needed a place to hide from the rising frequency of Turkish assaults on Greece. At this time, there were windlasses or detachable ladders for reaching the top. Due to steps being carved into the rock during the 1920s, getting up is much easier now.

Today, every one of the monasteries charges a nominal entrance fee. Men and women must normally dress in clothes that cover them when visiting Meteora. In addition to offering an amazing perspective, monasteries themselves are packed with religious artifacts, murals, icons, and libraries full of ancient texts.

How to reach Meteora:

The majority of people choose to reside in Kalambaka and Kastraki because they are the two towns closest to Meteora. Since there is essentially little infrastructure within the actual monasteries themselves and there isn't much parking, it is best to tour the monasteries by bus or on foot.

March to May and September to November