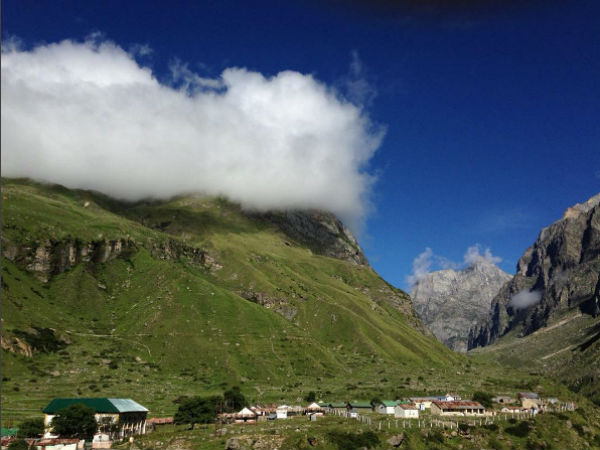 Situated on the banks of the gushing Saraswati river, Mana is the last Indian village located near the Indo-China border, in the Chamoli district of Uttarakhand. This tranquil village, surrounded by high Himalayan hills, is situated at an altitude of 3219 m above sea level. It is located at a distance of 3 km from Badrinath, which is a famous place of pilgrimage.

The surreal beauty of this tiny village draws a lot of visitors each year, which is why Mana has been rightly titled as a 'Tourism Village' by the Uttarakhand Government. Apart from being stunningly beautiful, it is also famous for its handcrafted woolen shawls and blankets, local herbs, etc.

The village and its landscapes are believed to be strongly associated with the Indian epic of Mahabharata. It is believed that the Pandavas had crossed the Mana village en route their journey to the heaven. The Vedic River Saraswati also originates in the Himalayan mountains that surround this heavenly place. Ancient caves that are associated with mythology are also located in the Mana village.

Mana is a place for all kinds of travellers. Given its stark beauty, picturesque trekking trails, ancient temples and mysterious caves, Mana is a favoured destination for leisure travellers, adventure enthusiasts, history & mythology enthusiasts, as well as spiritual and religious beings.

Mana can be comfortably reached from Badrinath and Joshimath, both of these towns are well-connected with the rest of the Uttarakhand state. Travellers mostly arrive at and hire taxis from Haridwar or Rishikesh, as these are well connected to major cities like Delhi and Dehradun.

Summer is an ideal period to visit this Himalayan village. This is also the time when the pilgrim tour of Char Dham Yatra at Badrinath begins. Monsoons get pretty hostile and are avoided by tourists. Tourists, travellers, trekkers, and devotees visiting Badrinath temple flock Mana once again post monsoon until October-November. The entire region receives heavy snowfall in the winter months and the villagers migrate to lower altitudes during the winter months.

A couple of tea and coffee shops in the region boast to be the last shops of India near the Indo-Tibet border. While some of these are genuinely the oldest shops around the area, others are modern and recently established. Nevertheless, it is an amazing feeling to sip tea and enjoy some piping hot Maggie with a stunning view of the mountains at the last tea shop of India.

The region has many mountains and ancient caves. One such cave which is right in the Mana village is believed to be the cave where Hindu God Ganesh had narrated the legend of Mahabharata to sage Shri Ved Vyas. A simple, minimalistically decorated Ganesh Temple, which is surrounded by a cave, is located at this spot.

The great Hindu sage Ved Vyas, who is known to be the author of Mahabharata, is believed to have lived in Mana town while composing the four sacred Vedas that are knowledge and storehouses of Hinduism. This ancient cave is more than 5000 years old. The top portion of the cave is often considered to resemble the pages of the Holy books of this wise sage.

The Saraswati river is known as a sacred and mystical river among the Hindu population in our country. This mystical river originates in the high mountains near Mana. A small temple dedicated to the river is situated next to the place, where she cascades from high rocks before steadily flowing down into a stream.

With strong roots in the Hindu mythology, it isn't surprising to see traces of mythology, stories, and legends in most landscapes of the Mana village. A popular story around a bridge over the Saraswati river says it was a huge boulder thrown by Bheem himself (the mightiest of the Pandava brothers) to help his family cross the roaring Saraswati river when they were passing through the Mana village in their journey to heaven.

Located at a distance of approximately 6 km from Mana, the Vasudhara falls is a sight to behold. The trek to the falls is quite challenging, given the high altitude and rugged terrain. It usually takes about 2 hours to reach the falls. The walk is extremely tiring but rewarding as well at the same time because of the panoramic views that it offers of the beautiful valley.