Ambedkar Jayanti 2020: List Of Things And Places In India Named After B. R. Ambedkar 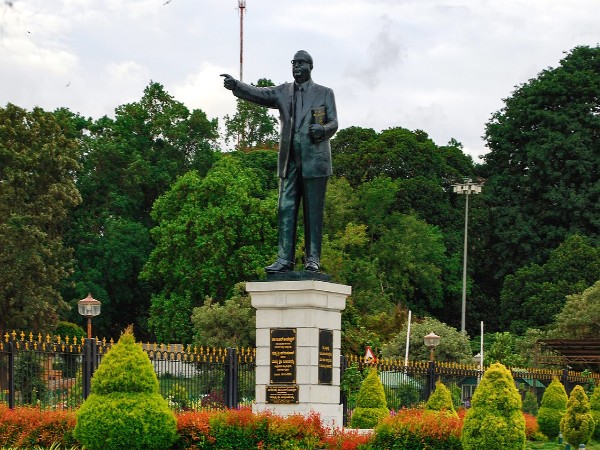 Far-famed as the "Father of the Indian Constitution," Dr Bhimrao Ambedkar was born on 14 April 1891. And as a tribute to this national icon, 14 April is observed as Ambedkar Jayanti across India.

Dr Bhimrao Ambedkar, also a Bharat Ratna Awardee spent most of his life toiling for the upliftment of Dalits and those from the underprivileged communities. Being a Dalit himself and a social reformer, Ambedkar changed the map of India. He is also popularly credited to be the power behind the Dalit Buddhist Movement in India. Besides playing a pivotal role in drafting the Indian Consitution, Ambedkar also had a hand in the establishment of the Reserve Bank of India.

To celebrate this auspicious day, we have compiled a list of famous things and places in India named after Dr BR Ambedkar. Have a look!

Located in the Adyar Estuary on Greenways Roads in Mandhavelipakkamin, Dr Ambedkar Mani Mandapamis a memorial dedicated to B. R. Ambedkar, the architect of the Indian Constituation.

Located in New Delhi, Dr Ambedkar Stadium is a football stadium. The stadium is titled in homage of Dr Bhimrao Ahmedakar. It inaugurated in 2007 and has a capacity of 35,000. It is currently utilised for football matches.

Bhim Janmabhoomi is a memorial sanctified to Dr Bhimrao Ambedkar and it is located at Mhow in Madhya Pradesh. The local government established this grand memorial on Ambedkar's 100th birth Anniversary - 14 April 1991. It was inaugurated by the then Chief Minister of Madhya Pradesh, Sunder Lal Patwa

The Dr B. R. Ambedkar Memorial Park or Dr B. R. Ambedkar Smriti Vanam is a monument dedicated to B. R. Ambedkar, the father of the Indian Constitution and champion of human rights. The memorial is located at Inavolu village in Thullar Mandal, Andhra Pradesh. The height of the statue of Ambedkar is 127 feet (39 m).

Ambedkar National Congress is a political party formed in Telangana. The party strives for the rights of Dalits. Mr Mohammed Kazam Ali Khan is the originator and President of ANC.

Dr Babasaheb Ambedkar International Airportis an internationalairportserving the city ofNagpur,Maharashtra,India. The airport is located at Sonegaon, 8 km (5 mi) South-West of Nagpur. The airport covers an area of 1355 acres (548 hectares). In 2005, it was named afterB. R. Ambedkar, the chief architect of the Indian Constitution.