Nativeplanet
»
Travel guide
»Unbelievable Facts About Gobi Desert Like Gobi Desert Has Only 5% Sand and It Snows There, Read on!

Unbelievable Facts About Gobi Desert Like Gobi Desert Has Only 5% Sand and It Snows There, Read on! 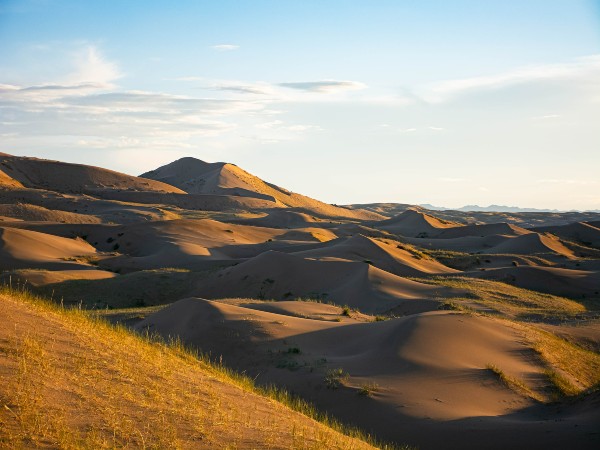 The Gobi Desert in southern Mongolia is well-known for being one of the world's most distinctive ecosystems and best-kept secrets. The area is well-known for its unusual natural formations, numerous locations with authentic dinosaur fossils, and a variety of indigenous plants and animals.

The Gobi Desert covers an area of 0.5 million square miles and extends through parts of Northern China and Southern Mongolia (1.29 million sq. km). A freezing desert, the Gobi has some of the world's most harsh weather, with substantial seasonal and daily temperature variations. Winter temperatures can dip down below -40°F, while summer temperatures can reach up to 122°F. A visit to the Gobi Desert is a must on any vacation to Mongolia.

Here is a list of amazing facts about the Gobi Desert:

The Gobi Desert can see temperatures as low as -40°C in the winter and as high as 45°C in the summer. It snows effectively enough in the winter to support its wild animals and livestock. The only desert in the world to offer such contrasting scenery, sand dunes can frequently be seen covered in snow.

The Gobi Desert is actually a collection of 33 individual deserts, each with its own unique features and landscapes. The largest of them, covering 70,000 square kilometers, is known as "The Galbiin Gobi."

The Gobi Desert expands yearly. As a result of desertification, the desert area is rapidly expanding southward. It usually travels toward China's south. Overtaking 3,600 square kilometers of grassland annually, the process is progressing at an alarming rate.

4) The Gobi Desert Is Filled with Fossils:

The maximum number of dinosaur fossils in the world is found in the Gobi Desert. Roy Chapman Andrews, an American researcher, discovered the first dinosaur egg nests from the Flaming Cliffs in 1923. His crew discovered more than 100 dinosaurs and transported them to the American Museum of Natural History in less than two years.

5) It Is Mongolia's Wealthiest Area:

Apart from dinosaur fossils, the desert is abundant in coal, copper, and gold. Since the late 2000s, enormous mining deposits in the Gobi have been in operation, including Tavan Tolgoi, one of the world's top 10 largest unexplored coking coal deposits, and Oyu Tolgoi, the third-largest copper and gold mine.