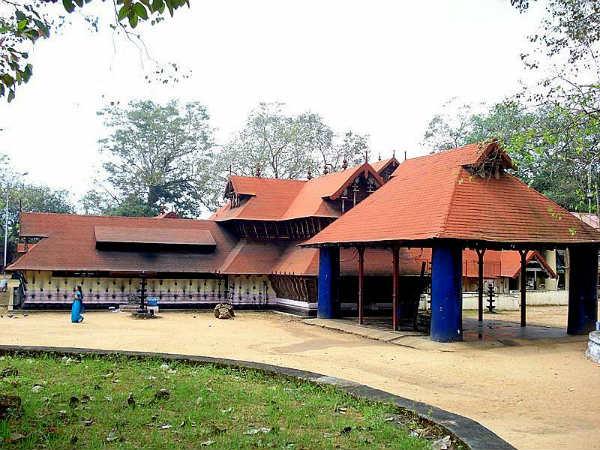 "God's Own Country" is not just known for the tourist places but it also has numerous religious places as well. Each of them has a great history and interesting mythologies behind their creations. Kodungallur Bhagavathy Temple is one among the famous temples in Kerala.

Goddess Kali is the presiding deity of Kodungallur Bhagavathy Temple. Locally, she is known as Sreekurumba and is a revered deity in the district of Thrissur. Therefore, shrine is also called as Kurumba Bhagavathy at Kodungallur.

The sanctum houses the icon of Goddess Kali (a fierce form of Durga). Bhadrakali is the most aggressive form of Shakti who is one of the prime goddesses in the Tantric tradition. The statue of Goddess Bhagavathy at Kodungallur Temple has eight hands. One hand holds the head of a demon while the other hands are adorned with swords of various kinds. Some years ago, animals sacrifices were made in the temple premises which is now completely banned by the law.

There are several myths related to the establishment of Kurumba Bhagavathy shrine. According to a famous legend, people of Kerala and the sage Parashurama was threatened by a demon named Daruka So, the sage requested Lord Shiva to help him defeat the demon and save the people. Upon Lord Shiva's instructions, a temple with the statue of Goddess Bhadrakali was built. Hence, Sage Parashurama consecrates the icon of Bhagavathy and she kills the demon Daruka.

Kodungallur Bhadrakali Temple is said to be one of the ancient temples in Kerala and it is believed that the temple gained prominence during the reign of the Chera dynasty. Another belief is that, this was a Shiva Temple earlier and later became an abode of the Goddess when Parashurama installed the statue of Goddess Kali.

The ancient shrine of Kurumba Bhagavathy has a vast premises. Inner Sanctum not only has the prime deity Kali but also has a shrine of Sapthamathrukas (Seven Mothers). Other two sanctums has Lord Shiva and Lord Ganapathi. There is a Pushkarani (temple pond) in the premises.

Goddess Kali represents the fierce form of Mother Goddess. She is known for her aggressiveness and anger. This form of the Goddess is worshipped across India. Kodungallur Bhagavathy Temple is surely one among the important Devi temples in India which calls for a visit during this Navratri.

How to Reach Kodungallur

Kodungallur is a temple town in Thrissur and it is around 45km from Kochi.