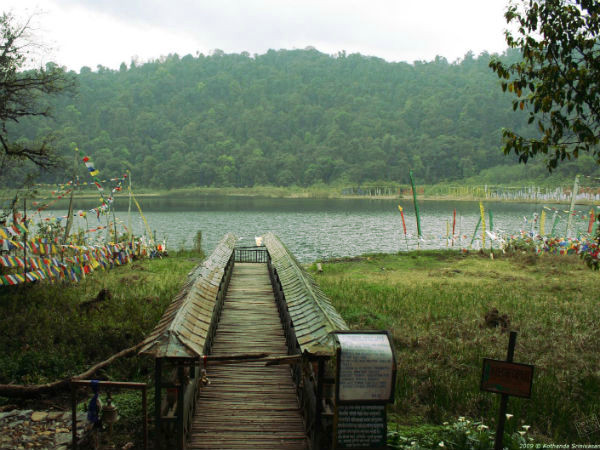 Sikkim is a gateway to the magnificent Kanchenjunga Mountains. With its pristine beauty, pleasant climate and enchanting mountain trails, Sikkim is a heaven for backpackers and travellers. It is the most favoured holiday and adventure destination for travellers across the globe.

While many places in Sikkim are extremely popular and are major tourist attractions, there still are numerous destinations that are less explored or totally unexplored. The Khecheopalri Lake in West Sikkim is one of the less-explored places in the region.

Located at a distance of 31 km from Pelling in West Sikkim, the Khecheopalri Lake is a sacred place of worship for Buddhists as well as for the Hindus. Khecheopalri means 'heaven of Padmasambhava', an 8th century Buddhist Master; and the lake is believed to be a wish-fulfilling lake.

The serene lake has references in Buddhist and Hindu mythologies. A common belief that goes around it is that Lord Shiva meditated in a cave above the lake. From an elevation, the lake appears to be in shape of a foot. It is, therefore, believed to be a footprint of Lord Shiva by the Hindus, and of the goddess Tara by the Buddhists.

Associated with many myths and lore, the lake has amusing stories and tales. It is believed that the birds of the region never let any dirt or impurity surface the water and pick it up as soon as anything falls on it. And truly, you would never find even a single leaf floating on the surface.

The lake premises can be reached by walking for a short distance from the entrance. A small Buddhist shrine and a Stupa, with numerous prayer flags around, can be visited in the lake premises. A wooden boardwalk leads to the lake and visitors must remove their footwear before walking on it. Numerous prayer wheels are lined up along the boardwalk.

The charming lake is surrounded by abundant greenery. There is a separate place where devotees light lamps and incense and offer prayers. Several colourful prayer flags perpetually adorn the lake peripherals. A large number of devotees gather at the Khecheopalri Lake for the religious fair that happens in the month of March/April every year.

There are no airports or railway stations in Sikkim yet. The best way to reach Khecheopalri Lake, therefore, is via Pelling, which is the nearest major town. Pelling is well-connected with the capital city of Gangtok, which is 112 km away and other major towns of Sikkim. Regular shared or private jeeps can be availed from Pelling to visit Khecheopalri Lake.

October through May is an ideal time to visit Sikkim. Winter temperature ranges between -5 and 14 degrees Centigrade in Pelling, and a degree or two lesser in the nearby villages. Yet, Pelling is a popular winter destination. Many tourists visit Pelling during the pleasant months of summer and spring. The region gets heavy rainfall and monsoons, therefore, are avoided by travellers.

Tucked away in the midst of thick, verdant forests and hilly slopes, the picturesque Khecheopalri Village is commonly known as the Monastery Village. This surreal place offers spectacular views of the majestic Kanchenjunga Mountain. This tiny village is sparsely populated. And the old, dilapidated houses give the place a feel of belonging to another era.

The Khecheoplari Village is apt for that relaxed holiday, where you do nothing but gaze at the mountains, immerse in the beautiful vistas, revere in a pleasant atmosphere and rejuvenate your mind, body and soul. Strike up a conversation with the friendly villagers or the red-robed monks and learn a thing or two about the ancient religion and culture.

The magnificent Kanchenjunga Falls is around 16 km from Khecheopalri Lake on the way towards Yuksom. The lake is 25 km away from Pelling, which has beautiful places that can be visited, if time permits. Falling from high rocks, it is a perennial waterfall and one of the major tourist attractions in West Sikkim.

There's a nominal fee to visit this attraction and you need to climb up a flight of stairs to view the actual falls. The water from the falls cascades down further into a pool and flows down steadily. A few adventure activities like rope-crossing are safely conducted over the steadily flowing water. The place has a few restaurants as well, where one can savour the local Sikkimese cuisine.