Kargil Vijay Diwas At Dras: Remembering The Bravehearts Of India 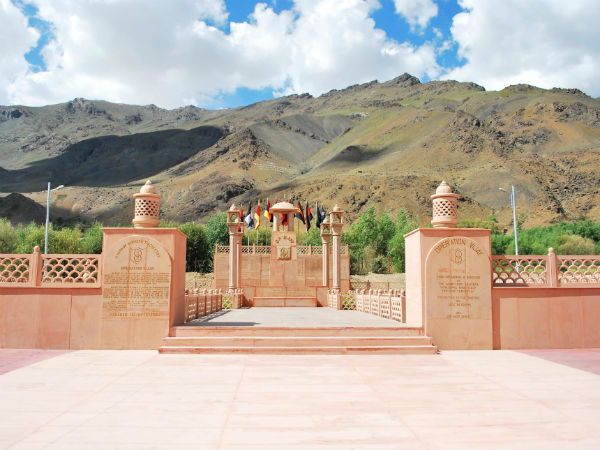 An English writer and philosopher GK Chesterton said about war, "a true soldier fights not because he hates what is in front of him, but because he loves what is behind him". Each year, on the 26th of July India celebrates Kargil Vijay Diwas as a homage to the country's Bravehearts who marked the nation's victory by sacrificing their lives for the love towards their motherland, in the war against Pakistan in 1999.

The Kargil Vijay Diwas or Kargil Diwas is named after Operation Vijay. As the nation and its citizens remember the extraordinary heroes, with a strong surge of patriotism, let's travel to the far off village of Dras to the Kargil War Memorial - also called the Vijaypath.

Located in Ladakh, at the foothills of the Tololing Hills, is the war memorial built in pink sandstone with several inscriptions. A melancholic mood sets in even as the hearts are filled with immense respect, pride and patriotism. A famous poem 'Agnipath' by Dr. Harivansh Rai Bachchan, displayed at the entrance, further overwhelms you.

On Kargil Vijay Diwas, a grand celebration with several functions and events is carried out throughout the nation; each year, Amar Jawan Jyoti at India Gate in New Delhi is visited by the Prime Minister of India who pays homage to the martyrs. The Kargil Diwas is especially celebrated with grandeur in Dras. The Dras War Memorial is located about 5 km from the Tiger Hill - one of the highest peaks in the region, which was also the battleground of the war.

A huge flag hoisted at the memorial will make your heart swell with pride. One can also see the peaks from here, that were captured back by the Indian Army during the war. Visit the sandstone wall inscribed with the names of all martyrs. The memorial premise has a museum which displays the exhibits from the war including army emblems, models of surrounding mountains ranges, document archives, etc.

"Manoj Pandey Gallery" is a special war gallery, named after Captain Manoj Kumar Pandey, who was awarded a Param Vir Chakra for his extraordinary valour and courage.The gallery displays photographs of the soldiers marching, cooking etc., weapons and artillery recovered from Pakistani troops, and more. A souvenir shop can be visited to purchase mementos for sentimental values and keepsake.

The Kargil War Memorial is located on the Srinagar-Leh NH1D. It is open for visitors between 10 AM - 5 PM, except for Sundays, and is closed between 12 PM - 2 PM.

How To Reach Kargil

By Rail: The nearest railway station to Kargil is in Jammu at a distance of approximately 470 km. It is well-connected with major cities like Delhi, Mumbai, Pune, Chennai, Kolkata, etc. Taxi services are available from the railway station to reach Kargil.