Nativeplanet
»
Travel guide
»Historical Monuments In Hyderabad: Reminding You Of Its Glorious Past

Historical Monuments In Hyderabad: Reminding You Of Its Glorious Past 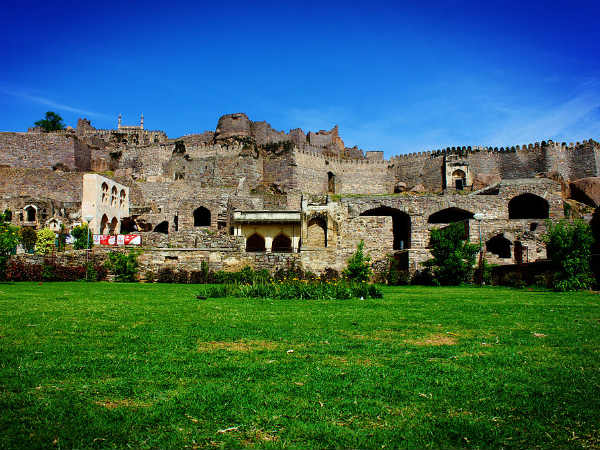 If you think the beauty of Hyderabad is only confined to its tasty biryani and the splendid Charminar, then you certainly need to travel more. Located on the banks of Musi river, Hyderabad is a historic city and is known to have been established during the late 16th century by Muhammad Quli Qutb Shah, the fifth ruler of the Qutb Shah dynasty. Later on, it was ruled by the Nizams before it became a republic state and merged into India post independence. Hence, you can find numerous ancient monuments within this historic city.

Have you tried to capture the beauty of its ancient splendours? If not, then you must plan a tour of Hyderabad; the monuments here will certainly teach you in detail about the glorious past of the state. Apart from their historical significance, you will also get stunned by their majestic appearance and architectural beauty. So, what do you think of exploring these monuments in Hyderabad this season? If you are keen to know more about them, read on.

The masjid is said to have been constructed so that the locals of Hyderabad, who were not able to afford a trip to Mecca, can also pay their regards to Prophet Muhammed. Today, Mecca Masjid has become a major tourist spot in Hyderabad and is visited by travellers from all over the country. As per local legends, the major room of the mosque contains a hair of Prophet Muhammed.

Charminar was built in the year 1591 by the founder of Hyderabad, Mohammed Quli Qutb Shah, and is located on the bank of Musi river. With four minarets, it also houses a mosque and hence, most of the Islamic festivals in Hyderabad are celebrated here. It is rightly said that if you are a history lover and are looking for a destination which never ceases to surprise its visitors, then it is Charminar; such is the popularity of this wondrous beauty that no tourist can avoid visiting it.

Built in the between the 16th and 17th centuries, the complex of Qutb Shahi Tombs houses numerous tombs and mosques which were built by the kings of the Qutb Shahi dynasty. Even though most of them are in ruins, you can still find the remaining ones to be compelling beauties on account of their historical significance and architectural beauty.

Surrounded by a beautiful garden, these ancient tombs are perfect places to learn about the history of the Qutb Shahi dynasty. The tombs are located in the vicinity of Golconda Fort and are built over a common raised platform. Wouldn't you love to turn back the pages of history and explore the glorious past of Hyderabad? If yes, the do visit these splendid beauties.

Yes, Golconda Fort lies in the same region where the world-famous Koh-i-Noor was found, one of the largest cut diamonds in the world. Even though the fort is only left to be visited by tourists from all over the world, there is still a lot to explore within its boundaries.

Built in the 17th century, this marvellous citadel is home to four small forts and several other monuments, such as mosques and palaces. Hence, it has been considered as one of the greatest citadels ever made in India. Overlooking the historic city of Hyderabad, Golconda Fort is a must-visit monument for every traveller who always looks forward to exploring the history of India.

Paigah Tombs houses the tombs of loyalists of the Nizams of Hyderabad, who were collectively termed as Paigah Family. This family consisted of loyal statesmen and generals who worked for the Nizams. Popular for their commendable structural formation, these tombs are weekend destinations for history lovers and architecture enthusiasts. How about a tour of these wonderfully built marvels and learning about the history of the Nizams?