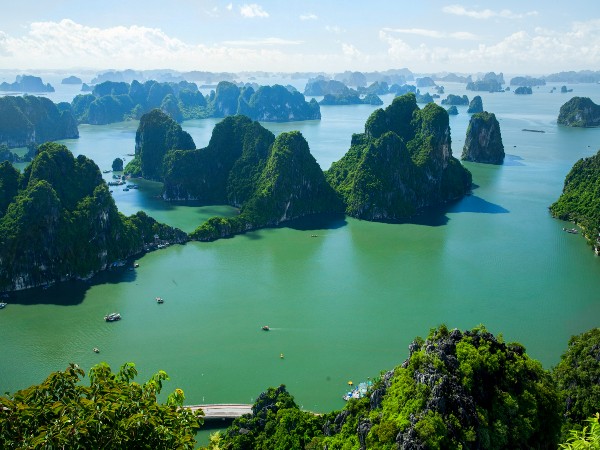 A UNESCO World Heritage Site, Ha Long Bay is 165 kilometers from Ha Noi, Vietnam's capital, and is situated in Quang Ninh Province in the northeast of Vietnam. It comprises a stunning seascape of limestone pillars over an area of 43,400 acres, includes more than 1600 islands and islets, the majority of which are uninhabited and unaffected by humans, and is a perfect example of a mature Karst landscape produced during a warm and humid tropical climate.

Halong Bay was named one of the seven new natural wonders of the world in 2011, and UNESCO designated it as a World Natural Heritage Site in 1994. There are around 3,000 rocky and earthen islands in the 1,500 square km (580 square miles) area, most of which have the shape of jagged limestone pillars protruding from the water. There are also numerous caverns and grottoes, which combined create an exotic and stunning seascape. The waterways and tropical forests are home to a variety of marine and land mammals, reptiles, fish, and birds.

Halong Bay is home to several natural wonders, divine myths, and significant historical significance. The history of Halong Bay is not as well known as its beauty. However, what we have today is the product of a million years of evolution. Contrary to popular belief, the bay was not formed by volcanic activity but rather by tectonic action.

Ha Long Bay as it is today is the result of long-term geological evolution that was influenced by a variety of factors. The formation of the 1,000-meter-thick limestone layer during the Carboniferous and Permian periods (240-340 million years ago) and the emergence of the Halong depression during the Neogene periods are the two most significant occurrences (10 to 26 million years ago). The Quaternary Pleistocene period saw the highest level of activity in the erosion process that created the limestone plain (11,000 to 2 million years ago).

Along with its incredible geological evolution over 500 million years, Halong Bay has also seen extraordinary historical change. Prehistoric humans lived in this area tens of thousands of years ago, according to historical research studies. With numerous relics discovered in Bai Th Mount, Dau Go Cave, and Bai Chay, Halong Bay also served as a historical milestone for Vietnam.

In Vietnamese, "Ha" means down, "Long" represents a dragon, and "Halong Bay" means the descending dragons' resting spot. Not only that, but the background tale is also intriguing and appealing. The fabled dragon didn't just settle down for a nap; instead, it assisted the Vietnamese in battling off the invaders. A couple of dragons were ordered to descend from the sky, building a powerful, rigorous wall made of precious pearls to stop the army of aggression just as the conflict was about to come to a close and the Vietnamese people were about to lose not only the battle but also their own land. The dragons decided not to return to their home after the battle, choosing instead to stay in this area to live and defend the local population. the country is known as "Halong" where the large dragon was found, hence the name, "Ha Long Bay".

How to reach Ha Long Bay:

Buses, taxis, motorcycles, ferries, hydrofoils, and private tour operators can all take you there. Alternatively, you can travel directly to Ha Long Bay from the airport. Consider using a helicopter or seaplane to reduce the trip from up to four hours to roughly 45 minutes.

March, April, May and September, October, and November.