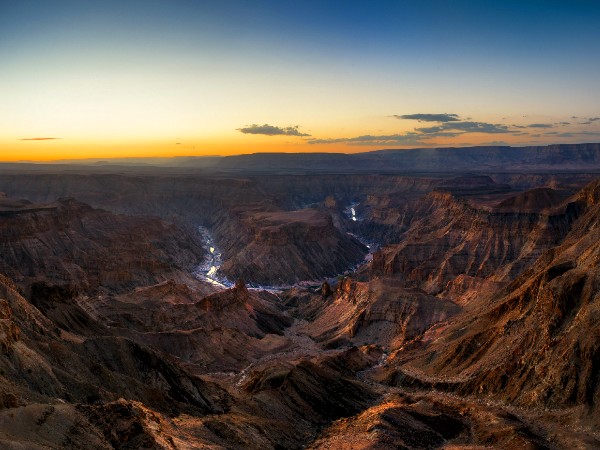 Unknown to many tourists, Namibia's Fish River Canyon is the second-biggest canyon in the world and the greatest canyon in Africa. It is tucked away in a remote area of the country's deserts. Visitors to the Fish River Canyon can enjoy breathtaking panoramic views, especially at Hell's Bend, a scenic overlook called for the river's horseshoe-shaped bend.
The Fish River Canyon traverses the vast Namibian desert for over 160 kilometers. The Fish River, the longest river in the nation with a maximum depth of over 500 meters, was cut it out.

Namibia's southern region is home to the Fish River Canyon. The river itself originates in the country's central mountains and flows for hundreds of kilometers, passing through the canyon, before emptying into South Africa across the border.

The Ai-Ais/Richtersveld Transfrontier Park in the south, where the deepest portion of the canyon is located, and Private Nature Reserves like the Canyon Nature Park or Vogelstrausskluft in the north essentially protect the entire canyon today.

Even though the Fish River Canyon's views and surroundings are breathtaking, the multi-day Fish River Canyon Trail is the only way to truly enjoy this natural treasure. One of the most popular hiking trails in the world is the Fish River Canyon. Numerous visitors from all over the world have been attracted to the gorge to experience the climbing and trail running it has to offer because of its vast scope and challenging terrain.

The route generally takes five days to complete and follows the Fish River for 88 kilometers through to Ai-Ais, with the exception of a 2 km dip west of Hobas & a few other alternate routes. Following the trail will reward you with some absolutely breathtaking sights, including serene hot springs, breathtaking vistas, and some recognizable fauna. After this challenging climb, you'll ascend to the exquisite Ais-Ais Hot Springs Resort, where you may unwind, & loosen up. The only time it can be completed is between May and September, and you must make advance arrangements for permits. It is one of the most difficult long-distance walks in southern Africa.

With 800,000-year-old implements discovered, sites around the Orange River show that humans have been using the region for at least 1 million years. Numerous sites dating from the colonial era to the Pleistocene and earlier have been located in the Fish River Canyon, although they have received little research.Over a billion years ago, the Fish River began to carve some of the oldest rocks in Namibia. Around 650 million years ago, a powerful mountain range was eroded to a broad plain that was flooded by the sea.

The biological creation of the Fish River Canyon then began some 350 million years ago. A huge graben developed along ancient tectonic faults. It created the wide, historic Fish River valley. The higher margins of the canyon are formed by the edges of this graben, which are currently more than 20 km apart. The riverbed was still 300 metres higher than it is now 300 million years after the creation of the graben structure. The graben was further deepened by glaciers during the so-called Gondwana-Glaciation.

Africa and South America have split apart thousands of years ago during a glacial. This division played a significant role in forming the canyon. Known as the Dyka glacial, a severe glaciation occurred on Earth during the Karoo ice age. The formation of the Fish River canyon was greatly influenced by this glacier. This canyon was created by more than 300 rivers that had enormous amounts of frozen water in their riverbeds but eventually dried out.

The Namibian capital Windhoek is approximately an 8-hour drive from the secluded Fish River Canyon. Before beginning your hiking experience, make sure you have access to a vehicle or are otherwise a part of an organized tour because the public transportation alternatives are highly limited.