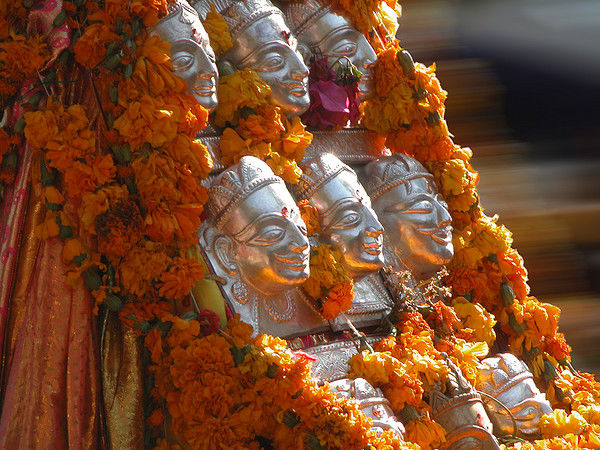 Dusshera festival is celebrated differently in various parts of India. Dusshera or Dasara is a grand festival in most parts of our country.

Dusshera in Kullu is a gala affair, unlike other places, the festival starts on the 10th day (on the day of Vijayadashami). On this day, Ragunath Ji ( Lord Vishnu) is worshipped and it is one of the prominent festivals in Kullu Valley.

The history of Kullu Dusshera goes back to 16th century, when it was ruled by the King Raja Jagath Singh. The legend is that, Raja Jagath Singh gets to know about a Brahmin who possesses beautiful pearls.

King desires to own those treasures but Durgadatta (Brahmin) only has knowledge and nothing else. Raja Jagath Singh tortures Durgadatta to give those pearls.

Unable to resist the torture, Durgadatta curses the king and self-immolates. After that, the King begins to see worms in the rice and blood instead of water.

Tormented by the curse, he seeks the solution. A holy man suggests to bring a deity of Rama from Ayodya. So, the king sends another Brahmin to retrieve an idol from Ayodhya.

The Brahmin succeeds in stealing the statue of Rama (Ragunath) and brings it Kullu. Raja Jagath Singh installs the deity and worships the god.

Thus, the king's curse will be lifted. Today, it is the same deity which is taken of Rath-Yatra (chariot ride) during Dusshera festival.

Palanquins of many gods are also carried in the procession
Photo Courtesy: ellen reitman

Ragunath Ji from that time is considered as the presiding deity of Kullu Valley. Dusshera in Kullu, beginning on Vijayadashmi, goes on for seven days.

During this time, one gets to see a vibrant side of Kullu. People of Kullu come together to watch the procession of Ragunath in Dalpur Maidan.

It is also a time for various cultural activities; International Cultural Festival is also organised in Kala Kendra (open-air theatre).

The seven days of the festival is well-organised and the fair is a mixture of activities, fun and bonding for Kullu people.

Many stalls are put up during the fair
Photo Courtesy: ellen reitman

The festivities starts by welcoming Hadimba, the goddess of the royal family of Kullu. Later, Ragunath Ji is placed in the chariot and taken on a procession. Many gods and goddesses are carried around in palanquins to participate in the procession.

Dusshera festival in Kullu goes on in grandeur and also attracts many tourists. If travellers visit Kullu Manali in October, they can also enjoy and participate in the festivities.

This is yet another enticing side of the famous Kullu in Himachal Pradesh!