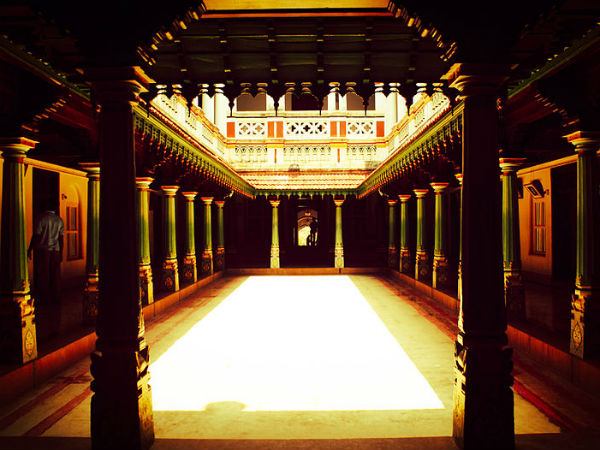 Chettinad, the word that is popular throughout the country due to the exceptional cuisine that everybody's familiar with, is actually a region in the Sivaganga district of Tamil Nadu. The word "Chetti" is a Sanskrit word, which means wealth. Chettiar is a social caste of Mercantile Bankers, who are well known for being traders of spices and salt.

This finds place in their cuisine, of which some of the most beloved dishes are Chicken Chettinad and other seafood made in Chettinad style. The religious sites that are dotted in and around the region have made Chettinad a nomination in UNESCO World Heritage Sites.

Chettinad used to be a group of 96 villages, which has now been reduced to 74 since a lot of residents emigrated to Southeast Asia in the 19th and early 20th century. During this time, they even used to import white marble, chandelier, crockery, etc., from the East Asian and European countries like Burma, Belgium and Indonesia.

Here are some of the places to visit and things to do in Chettinad.

During the 19th and 20th century, the people of Chettinad traded salt and spice for the above mentioned items like marble and decorative articles since they used it for building huge Chettinad-style mansions. The mansions were so big that the entrance would start on one lane and exit on the other lane!

Locally called nattukottai, these mansion can be seen till date, wherein some of the remnant mansions have been turned into luxury hotels. If you want to travel back a century in time, then make sure to visit, or even live in one of these mansions!

These palatial homes show off a gloss till date due to the coat of egg whites and lime given to the walls. They exhibit ceiling tiles from Spain, chandeliers and teak pillars from Burma and a rainwater harvesting method adopted hundreds of years ago. They have been built in such a way that these palatial homes remain cool even in the scorching heat of Tamil Nadu.

About 17 km from Kanadukathan village of Chettinad, lies the beautiful and ancient Pillayarpatti Temple. This 5th century temple is believed to be one of the most important places that houses the shrines of Lord Shiva and Ganesha.

Thirumayam Fort, a fortress spread across the area of 40 acres was built in 1687 by a local ruler, Vijaya Raghunatha Sethupathi. Since it is perched at a vantage point, a fantastic view of the region's landscape can be seen.

But the main attraction of the place is the group of 3 rock-cut temples which is dedicated to Lord Shiva and Lord Vishnu. Bastions with canons belonging to the British can be seen in the fort.

How To Reach Chettinad

By Air: Located at a distance of 100 km from Chettinad lies the Madurai International Airport, which is the closest air base to the region. It is well connected to the main cities of India like Delhi, Mumbai, Bangalore, etc.

By Rail: Thiruchirapalli Railway Station is the closest railhead to Chettinad, which is connected to all neighbouring cities like Chennai, Rameswaram, Coimbatore, etc.

By Road: It is well connected to the rest of the state by roads of good condition. Taxis and interstate buses are regularly available, that connects Chettinad to places within and around the state.