9 Best Places For Paragliding In India 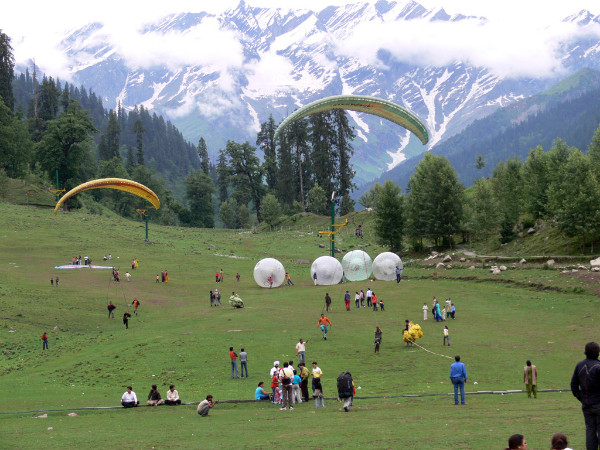 Paragliding is one of the top adventure sports across the globe. The thrill of flying in the air is something which cannot be missed and paragliding is the best way to do it. In recent decades, paragliding has become one of the popular adventure sports in India too. It began in Himachal Pradesh during the 1940s and has gained a lot of importance since then. There are many places that are known for paragliding in India. Most tourists who visit these places love to try this amazing sport.

So, here we bring you a list of the best places for paragliding in India. If you want to try this adventure sport then head to these paragliding destinations for a wonderful experience.

The mountainous landscapes of Solang Valley have made it a hotspot for adventure sports in Himachal Pradesh. In winter, the snow-clad mountain slopes serve as a ground for skating and snowboarding, whereas the summer season is known for adventures like paragliding and zorbing.

The village of Bir-Billing is located in the foothills of the Dauladhar Mountain Ranges in Himachal Pradesh. The hills of Bir has become one of the best places for paragliding in India. In recent years, it is also the venue for paragliding competitions.

Goa is famous for adventure sports, especially water sports. However, you can also try paragliding at some places. Arambol Beach, one of the famous beaches in Goa, offers an awesome paragliding experience.

Kamshet is one of the best paragliding destinations in Maharashtra. The picturesque landscapes and suitable environment have made it suitable for a paragliding spot. Today, there are many training centres for paragliding in Kamshet. Sometimes you are also allowed to fly over the Pavana Dam.

Rishikesh, the adventure capital of India, offers oppurtunities for practising several sports. Apart from activities like white water rafting, kayaking, etc., you can also try paragliding here. A place called Kunjapuri has turned into the best spot for paragliding near Rishikesh.

Nandi Hills, one of the best weekend getaways near Bangalore, is a favourite spot for the city dwellers. Not only because of its scenic beauty but also for some adventure activities. Slowly it is developing as a paragliding destination in Karnataka.

Shillong is a lesser known paragliding destination in India. The picturesque landscapes of Shillong are best explored while paragliding.

The hill station of Pavagadh is known as a religious place in Gujarat. Pavagadh along with Champaner (at the base) are also UNESCO World Heritage Sites. In recent times, Pavagadh has become a paragliding spot.

Gangtok, the capital of Sikkim, is one of the top tourist spots in North East India. Its beautiful locales have made it a hotspot for many adventure activities. Hence, it is developing into one of the top paragliding destinations.

Comments
Read more about: adventure adventure travel rishikesh bir nandi hills arambol kamshet
Other articles published on Jan 27, 2017
We use cookies to ensure that we give you the best experience on our website. This includes cookies from third party social media websites and ad networks. Such third party cookies may track your use on Nativeplanet sites for better rendering. Our partners use cookies to ensure we show you advertising that is relevant to you. If you continue without changing your settings, we'll assume that you are happy to receive all cookies on Nativeplanet website. However, you can change your cookie settings at any time. Learn more
Change Settings Continue