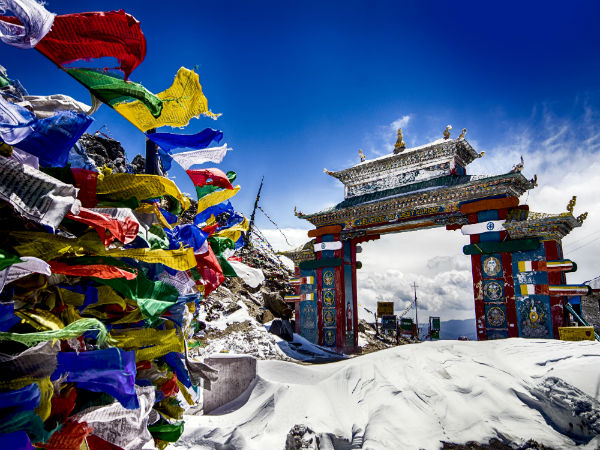 It is not an overstatement to say that the best thing about the winter season is the snowfall - tiny snowflakes falling from above, which cover the entire place in a pure white sheet forming a mesmerising sight.Winter has marked its arrival with snowfall beginning at many parts of the country. Amongst the many locations in the country, most people head to Kashmir and Himachal Pradesh. Apart from these two places, there are various other destinations which one must visit for snowfall.

It is also that time of the year for some thrilling winter sports, such as skiing and snowboarding. People simply love to watch the hilly slopes covered in a thick blanket of snow and some love to skate through its slopes. The snowfall season in India is between the months of December to March. Have a look at some of the best destinations for the same and make your choice.

Situated at altitude of 2285 m above sea level, Mukteshwar is one amongst the most beautiful winter spots in the country. With breathtaking views of the majestic Himalayan peaks, which is further added to by the dense forests, the place continues to attract nature lovers and honeymooners.

With its snow-covered slopes and green meadows blanketed under thick snow, Mukteshwar is truly one of the most romantic destinations that one must visit during winters.

Located in the lap of the imposing and strikingly beautiful peaks of Nanda Devi, Panchachuli and Trishul is the laid-back hilly town of Binsar. The town is known for its serene forests which encompass the Binsar Wildlife Sanctuary.

Apart from this one can enjoy the breathtaking views of a number of Himalayan peaks, such as the Kedarnath and Nanda Devi, which are truly every photographer's dream to capture.

Tawang is one of the lesser-known destinations amongst snowfall enthusiasts. The remote town of Arunachal Pradesh demands a flexible itinerary while travelling here as it is one amongst those places which receives snowfall throughout the year but gets the highest snowfall in the month of December. The entire town, along with its nearby peaks, are wrapped in snow yet offer you brilliant views of the region.

One of the romantic escapes for winters, which comprises of the Himalayas, is Khajjiar, which truly is paradise for one to enjoy the snowfall.

This scenic town of Himachal is fondly called Mini Switzerland of India, due to its similarities with the European country, which is surrounded by majestic hills and deep woods, which are the abode of a number of wildlife species.

Chopta is a small hamlet located in the state of Uttarakhand, which would leave you charmed by its beauty and serenity. The temperature at this hamlet witnesses a significant drop during winters which adds a magical charm.

Situated at an altitude of approximately 13,000 ft, Chopta gives one breathtaking views of the peaks of Trishul, Nanda Devi and Chaukhamba from its various viewpoints.

Located at a distance of 80 km from Shimla, Narkanda is placed at an altitude of about 884 ft above sea level. The place is slowly transforming itself into becoming a tourist hotspot especially during winter months from December to mid-February.

It is one of the best choices for those who come looking forward to a holiday away from the maddening crowds of tourist hotspots.

Encounter the beginning of snowfall in the month of December as you go around the glacial sighting in the winter wonderland of Sonamarg. The weather here would drop down to subzero level during this month.

Sonamarg translates to meadow of gold. When here, make sure you pay a visit to the lesser-known Thajiwas Glacier located at a distance of about 7 km from the town of Sonamarg. Some of the best things to do when here would be sleigh rides, snowboarding and skiing.