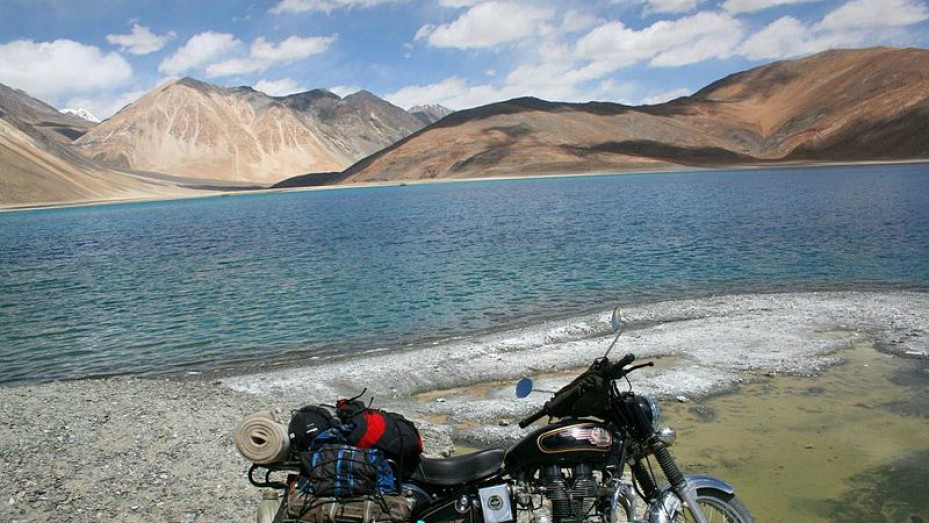 Pangong Tso, also known as Pangong Lake, is situated in the district of Leh of Jammu & Kashmir at an altitude of 4350 m above sea level. Placed on the Changthang Plateau bordering Tibet, which is under China, the lake extends up to 134 km in length with more than half of it lying in Tibet.

It lies in the exact area from where India can clearly observe Chinese incursions. The lake is thus a disputed territory with the Line of Actual Control passing through it.

Tourist Places In And Around Pangong

Despite being a salt-water lake, Pangong completely freezes during winters. The water of the lake being brackish allows for very low micro-vegetation and minimal aquatic life. Only a few species of perennial herbs and shrubs are found in the swampland around the lake.

A wide variety of birds, including numerous migratory birds, have adopted this lake for breeding. During the summer season, Bar-headed goose and Brahmini ducks can be seen in the region. In addition to this, wildlife species like the Marmot and Kiang are also seen here.

The lake is close to being selected under the Ramsar Convention, a setup for the conservation of Wetlands of International Importance, especially as Waterfowl Habitat, as a wetland of international importance. Pangong Tso will be the first trans-boundary South Asian Lake under this convention, if selected. According to records, the lake has receded over the years, with evidences of a thick layer of mud and sand deposits in the lake.

The beauty of the place has been captured in movies like ‘3 Idiots’ and ‘The Fall’ in the year 2010 and 2006, respectively. It was after the success of these movies that this place has become more popular among tourists all over the world.

The region experiences temperate summers and extremely cold winters. Travellers are recommended that they visit this place during summers, May to September, as during this time the temperature of the place ranges between a maximum of 40° C and a minimum of 5°C.

Travellers can also visit this place during monsoons, which stretches between July and September. During winters, October and February, the temperature of the place may drop down to as low as -14° C, while the maximum temperature does not rise beyond 24° C. As a result, tourists are recommended not to visit the place.

How To Reach Pangong

Pangong is Famous for

How to Reach Pangong