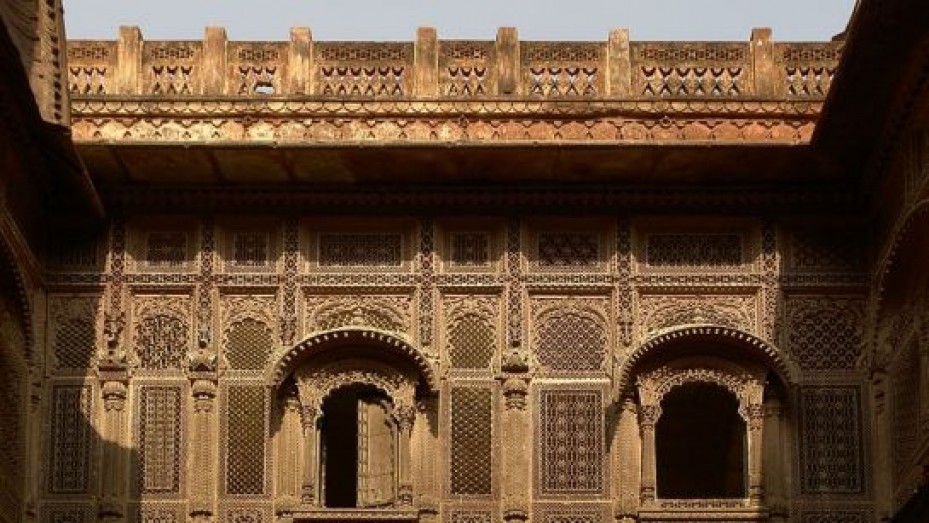 Mehrangarh Fort is perched at an altitude of 150 m on a lofty hill. This magnificent fort was constructed by Rao Jodha in the year 1459. This fort can be reached by road from the Jodhpur city. There are seven gates leading to this fort where visitors can see the marks created by the hits of cannon balls during battles on the second gate.

There is a chhatri of Kirat Singh Soda, a warrior who fell down here while protecting the fort against Amber’s armies. Chhatri refers to a dome-shaped pavilion which was built to express pride and honour in the rich culture of Rajputs.

The Jai Pol Gate was built by Maharaja Man Singh to celebrate his victory over Bikaner and Jaipur armies. Another gate known as Fateh Pol was constructed by Maharaja Ajit Singh to mark his victory against the Mughals.

One part of the fort has been converted into a museum which has a large collection of royal palanquins. This museum contains 14 display rooms adorned with royal weapons, ornaments and costumes. Moreover, visitors can see four period rooms like Moti Mahal, Phool Mahal, Sheesha Mahal and Jhanki Mahal.

Moti Mahal, also known as the Pearl Palace is the biggest period room of the fort. This palace was built by Raja Sur Singh, where he used to meet all his subjects. Here, tourists can also see the ‘Sringar Chowki’, the imperial throne of Jodhpur.

There are five alcoves which lead to hidden balconies where the five queens of the king used to listen to the court proceedings. Phool Mahal is one of the grandest period rooms of the Mehrangarh Fort. This palace served as a private chamber for the Kings. Also known as the Palace of Flowers, it has a ceiling, rich in gold filigree.

Maharaja Abhai Singh built this palace in the 18th century. The gold was supposedly looted from Ahmedabad after the King's victory over the Mughal warrior, Sarbuland Khan. The royal portraits and Ragmala painting were brought to the palace during the reign of Maharaja Jaswant Singh II.

Sheesha Mahal is adorned with beautiful mirror works. Visitors can see mirror works displaying vibrantly painted religious figures in the palace. It is also known as the 'Hall of Mirrors'.

One can also see the Takhat Vila which was built by Takhat Singh. He was the last ruler of Jodhpur and resident of the Mehrangarh Fort. The architectural design of the Vila displays both traditional and colonial style.

Jhanki Mahal is a beautiful palace from where the royal ladies used to watch the official proceedings being conducted in the courtyard. This palace presently houses a vast collection of royal cradles. These cradles are adorned with gilt mirrors and figures of bird, elephants and fairies.