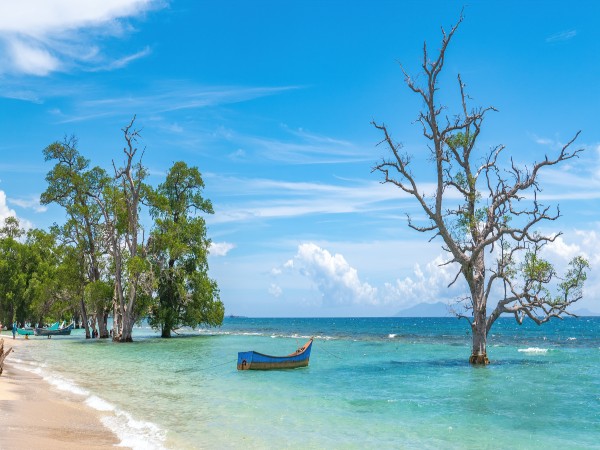 Lying a mere 350 m (1,150 ft) off northern Sumatra is the tiny, volcanic island of Weh, surrounded by the Andaman Sea, Weh is the northernmost point of Indonesia's archipelago, and was formed during the Pleistocene age by an eruption that separated it from the mainland.

The highest point is a fumarolic volcano reaching 617 m (2,024 ft) in height, but there is also a volcanic cone in the rainforest, three boiling mud fields, hot springs and underwater Fumaroles. During the 2004 tsunami, Weh received some damage. However, thousands of replacement mangrove seedlings have since been planted, houses rebuilt and the island has recovered.

Sabang harbour, which is both deep and sheltered, was used as a re-furling station, first for Dutch naval steamships in the 1880s, and later for merchant's vessels. It was few Port for time, though the government withdrew that status during the 1980s when both the economy and the population declined.

For those who make the trip, Weh is charming. Its significant ecosystem has been recognised with a nature reserve, covering both sea and land, scenically lovely, with hills, rocks, caves, and secluded beaches.

Weh is a tranquil spot, as yet undeveloped. The locals don't see many foreigners, just a few NGOs from Aceh, and the occasional intrepid diver - simplicity and natural beauty are its strengths.

It can always rain on Weh, but the wettest months are from November to February

Northern Sumatra is very strongly Muslim. So be careful not to offend people by dressing or behaving inappropriately