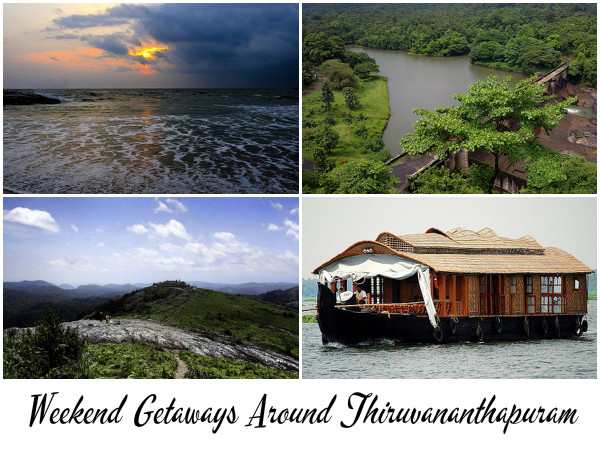 Thiruvananthapuram is the capital city of Kerala which is referred to as 'God's Own Country'. It is often called Trivandrum, a derivative of the original name given by the British. It lies on the southern tip of India in the west coast.

There are museums, planetariums, libraries, cricket grounds, amusement parks and other entertainment option for all ages. If you are travelling with children or if you are a resident of the city and are looking forward to spending the holidays with your kids, there are many fun destinations to head to. Here is a guide to some of the weekend getaways around Thiruvananthapuram.

Kovalam is a well-known beach town situated near Thiruvananthapuram. The town stands facing the mighty Arabian Sea. The beach is not very far from the main city. The word Kovalam is derived from Malayalam word that means 'groves of coconut'. The name is very apt for the town since it has abundance of groves of coconut trees. Like Kashmir is considered 'Heaven on Earth', Kovalam is referred to as the 'Paradise of the South'.

Varkala is a beautiful coastal town in Thiruvananthapuram district of Kerala. It is the only place in Kerala where the hills come close to the sea. The uniqueness of this place is that of the merging of cliffs with the Arabian Sea. The Geological Survey of India calls it as the Varkala Formation. The beaches of Varkala offer spectacular views of the setting sun. Travellers coming here can enjoy the scenic view of the sunset from a beach cafe while sipping on a iced tea.

Ponmudi, literally translated as the Golden Peak, is a popular hill station located in the Thiruvananthapuram district of Kerala. Situated at an altitude of 1100 mt from the sea level, it is constituent of the Western Ghats mountain ranges. Pleasant weather and scenic surroundings make Ponmudi an ideal holidaying spot during summer season. Connected to the city of Thiruvananthapuram by a narrow serpentine road, it offers picturesque views to those who travel by road. The hills are blessed with greenery and the place has many wonders in store for travelers and nature lovers. Those who have their spirits for adventure in place can indulge in trekking and hiking. The long and winding hairpin curves make the trip to Ponmudi an unforgettable experience.

Punalur is a small scenic town located on the borders of Tamil Nadu and Kerala. The town is known for being the pioneer in bringing Kerala's industrial revolution that happened with the setting up of the Punalur Paper Mills. The river Kallada flows through Punalur. The place derives its name from ‘Punal' meaning water in Tamil and Malayalam and ‘Ooru' meaning place. Hence it translates into "town of water". The administrative headquarter of the Western Ghats is situated here and is known as Pathanpuram Taluk, which is another gateway to the Western Ghats. This town is also known as the ‘lap of the Western Ghats'. It is the fifth largest city in the south.

India's first planned eco-tourism spot, Thenmala is a cultural centre for music and other art forms. Spend an evening at the amphitheatre to enjoy local cultural performances, head to the Deer Rehabilitation Centre for a chance to catch a sight of the spotted deer and sambar and culminate your trip with a visit to the Sculpture Garden. It is a place to experience waterfalls, nature and wildlife at their best. Do visit the adventure zone here where you can indulge in trekking, mountain biking and boating also.

Kumarakom is a collection of small and scenic islands and is one of the most sought-after travel destinations in Kerala. Nestled on the Vembanad Lake which is regarded as the biggest freshwater lake in Kerala, it attracts travelers from all over the world with its pristine and crystal beauty. Located at a distance of about 12 km from the district of Kottayam, this place gained worldwide recognition on account of its backwater tourism. Surrounded by many streams and dotted with emerald stretches of greenery, the green peninsula of Kumarakom invites travelers to unwind and relax.

Located to the East of Kottayam, Peermede is one of the hill stations of Kerala. This hilly territory beckons its visitors with it's adventurous trekking trials, picture perfect landscapes and cool romantic weather. The town got its name from Peer Mohammad who was a Sufi saint.One would see wide areas of tea, cardamom, rubber and coffee plantations spread across the hills. Other attractions of this place include Periyar Tiger Reserve and waterfalls.

Vagamon is a hill station that lies in the border of Kottayam and Idukki district of Kerala.It is a tourist hotspot due to the lush green plains, blue hills, meandering rivers, gushing waterfalls, fresh and breezy air and the deep pine forest. Thangal Hill, Murugan Hill and Kurisumala ornate the small town with their natural beauty. One can go for rock climbing, trekking, mountaineering and paragliding here. Also if you not adventurous, you can sit back and admire the breathtaking surroundings and marvel at the variety of flowers and orchids that are found here.Vagamon is often called the ‘Scotland of Asia' and truly is a breathtaking place.

Comments
Read more about: kovalam varkala thenmala vagamon weekend getaways
Other articles published on Feb 23, 2015
We use cookies to ensure that we give you the best experience on our website. This includes cookies from third party social media websites and ad networks. Such third party cookies may track your use on Nativeplanet sites for better rendering. Our partners use cookies to ensure we show you advertising that is relevant to you. If you continue without changing your settings, we'll assume that you are happy to receive all cookies on Nativeplanet website. However, you can change your cookie settings at any time. Learn more
Change Settings Continue