The Gem Of Spiti - Tabo Monastery 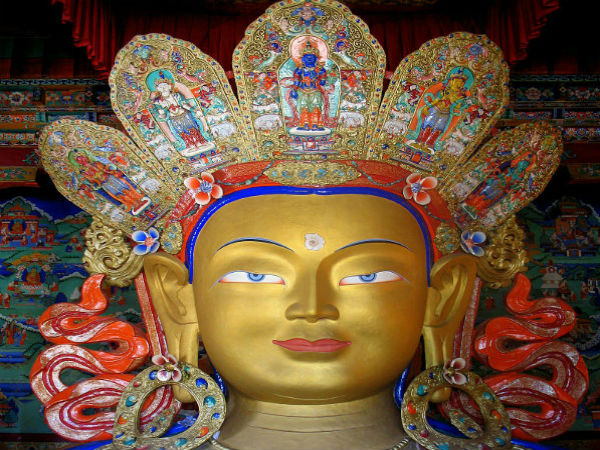 Fondly called the Ajanta of the Himalayas, the Tabo Monastery is located at altitude of 10,007 ft in the districts of Lahaul and Spiti in Himachal Pardesh. The monastery is considered as one of the oldest Buddhist pilgrimage centres of the Trans-Himalayan region.

Tabo Monastery is held high in regard by the Tibetan Buddhists and comes second in importance after the Tholing Gompa in Tibet. The monastery is spread across an area of more than 6300 sq m and comprises of nine temples and gompas.

The monasteries here were founded in the year 996 AD by a Buddhist king named Yeshe-Ö with the help of Tibetan translator Rinchen Zangpo which is validated by an inscription found on one of the walls of the structure. The monastery is home to several thankas, mural and statues along with paintings which depict the culture and history of the Himalayan region.

The Meeting Of Two Cultures

The murals showcase how the place was a meeting point of two different cultures, the Tibetan origin and the Indian origin. One particular feature which highlights this factor is the iconic representation of the guardian deity Wi-nyu-myin.

The monastery at present has nine temples. Four stupas along with a number of cave shrines which are used by monks for meditation and prayers. The original monastery was severely damaged during the 1975 Kinnaur earthquake. After its full restoration and construction of new structures His Holiness the 14th Dalai Lama visited the monastery in the year 1983 and began the Kalachakra festival.

The monastery in total has about 45 odd monks who are led by Serkong Tsenshab Rinpoche.

The main temple at the monastery has an entrance hall called Go Khang which is followed by an Assembly Hall named Du-Khang. Towards the western end of this hall one can find a recessed area which is the shrine area with an ambulatory passage known as Kor Iam Khang. The entrance hall houses images of Yeshe-Ö and his two sons Nagaraja and Devaraja on its south wall.

One can see the Vajradhatu Mandala in the new hall after entering the old hall, where the main deities of Vajradhatu and Vairocana are seen seated on a single lotus throne. The mandala also accommodates 32 life-size clay statues of various deities which are embedded against the wall. The paintings on the walls of the main temple date back to the 15th or sometime during the early 16th century and these are well maintained and shine bright.

The main temple room is dark and is lit by a small sky window. The inner vestibule houses multihued paintings of various Buddhist and Hindu gods. Adjacent to the vestibule is a small room which is where the garments used for ritual dances are kept.

One can find about 50 odd clay images along with full-sized busts of various gods and demons on the back wall of the main hall. One can also see the 108 holy scriptures which are displayed here, the scripture weigh about 500 pounds.

The Older Group Of Temples

Ser-Khang or The Golden Temple is said to have been covered with gold at one point of time. The structure was renovated by Sengge Namgyal who was the king of Ladakh during the 16th century. The walls and ceilings of the temple are covered with beautiful murals which are well preserved and date back to the 16th century.

The Bodhisattva Maitreya Temple is an older temple, which was built sometime during the first 100 years of the main monastery. Some of the remnants found here date back to the 14th century. As per a painting which was found in the Mandala Temple, the Maitreya Temple was double storied which is proved to be true. The image of Bodhisattva Maitreya found here measures over 20 ft in height.

The Trom-ton Temple is believed to be founded by Dromtön who was one of the main disciples of Atisha. The temple houses murals which depict the eight Medicine Buddhas which date back to the 17th century.

The small Mandala Temple here is used for tantric rituals and teachings. This temple houses some impressive paintings and the remnants of the carvings found here date back to the period between the 13th and 14th century.

Comments
Read more about: travel india spiti religious travel himachal pradesh
Other articles published on Aug 8, 2017
We use cookies to ensure that we give you the best experience on our website. This includes cookies from third party social media websites and ad networks. Such third party cookies may track your use on Nativeplanet sites for better rendering. Our partners use cookies to ensure we show you advertising that is relevant to you. If you continue without changing your settings, we'll assume that you are happy to receive all cookies on Nativeplanet website. However, you can change your cookie settings at any time. Learn more
Change Settings Continue