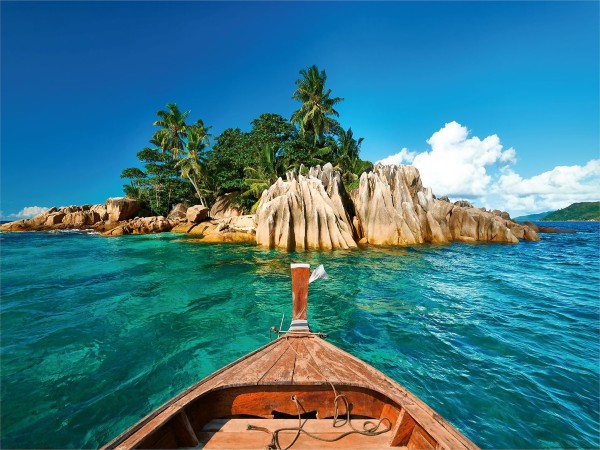 The island of Silhouette lies 20 km (12 mi) northwest of Mahe and with an area of 20 sq km (7 sq mi), it is the third largest island in Seychelles. Unlike many of the other islands in the chain, Silhouette is formed of granite, but the rocks are softened by the dense, lush rainforest which covers this round island. With a tiny population, and just one small hotel on the island, this untouched paradise is the ultimate get-away.

Named after Etienne de Silhouette (1709-1787), the french minister of finances under Louis XV, the island has five peaks over 500 m (1,640 ft), making the scenery rather dramatic. The summit of Mount Dauban at 740 m (2,428 ft), the highest point on the island, looms above the idyllic, unexplored rainforest, thick with rare hardwoods, increase trees and pitcher-plant orchids endemic to Silhouette.

The island supports one of the richest bio-diversities in the western Indian Ocean, with many endemic and endangered plants and animals. The large areas of Primeval forest are untouched by modern man and are home to, among other species, the last known Seychelles sheath-tailed bats in the wild.

Among the more famous inhabitants are the giant tortoises. The Seychelles tortoise was almost completely eradicated by sailors who used them for food as they were able to survive aboard ships for up to six months without food and water. This activity lasted until 1840 when the last of the animals were taken into captivity. A handful of them was found in captivity in the 1990s, as Arnold's Giant Tortoise Conservation Project aims to keep these two species from extinction. You can see Giant tortoises at the breeding centre near the old Dauban Coconut Plantation.

The island's marine environment is just as rich as that on land, and there are coral reefs and granite cliffs to explore. The huge, colourful coral reefs are home to exotic fish of all shapes and sizes, making the island appealing to snorkelling and diving fans. The coral habitats are exceptionally healthy, though the strong currents can be a problem for swimmers. There are also some pristine beaches on the island, set in pretty coves and secluded bays, and it is likely you can find one all to yourself. This island is heaven for honeymooners, or those who simply want to unwind is an island paradise.

By helicopter or boat from Mahe

The island is situated within a Marine National Park.