13 Things About Shore Temple in Mahabalipuram 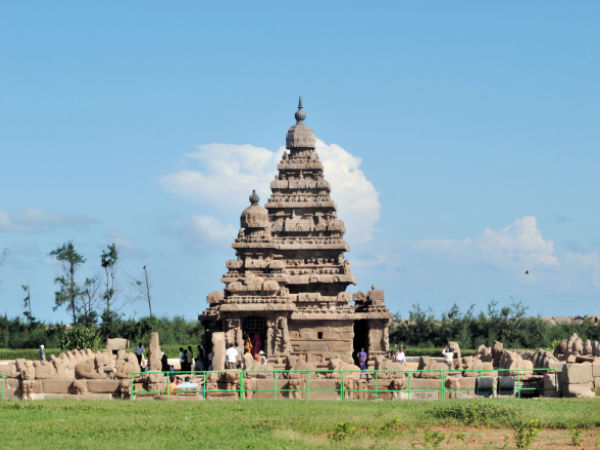 The Shore Temple which is on the banks of the Bay of Bengal is one of the main attractions of Mahabalipuram. Its beautiful structure is an architectural marvel, which depicts the ancient finesse of art.

The Shore Temple which was built during 700 - 728 AD has stood the test of times. Once a busy village port of Mahabalipuram is now a UNESCO World Heritage Site in Tamil Nadu.

Let us get into the glorious past of Shore Temple!

The Tale of Seven Pagodas

Shore Temple was named as 'Seven Pagodas' due to its pyramidal structure. The name 'Seven Pagodas' indicate to the existence of 7 temples in the past. Now only Shore temple remains to tell the tales of the past.

In the time of Pallava dynasty, Mahabalipuram was popular trading port. It is said that the Shore Temple acted as a landmark for the navigation of ships.

The construction of Shore Temple was started by Pallava ruler Narasimhavarman II. Later, Cholas built the additional parts of the temple after invading the Mamallapuram from the Pallavas.

The existence of Mamallapuram and the Seven Pagodas have been recorded by some European travellers. It indicates to the popularity of the port and its trading connections outside India.

Shore temple is a complex of 3 temples. One big temple and two small temples. In that two temples have pyramid shaped gopura (temple tower).

Two shrines in the Shore Temple are dedicated to Lord Shiva. The 3rd and the small temple is the Vishnu temple. This depicts the blend of religious ideologies which existed in the past.

The mythology of the King Hiranyakashipu and his son Prahalada is related with the temple. It is believed that after Hiranyakashipu was killed by Lord Vishnu, Prahalada becomes the king. The legend goes that Prahalada's son Bali founded Mahabalipuram in this place.

The temple was also named as Jalashayana (lying in the water) because it is situated at the sea level.

The existence of more temples around the Shore Temple has been recorded. It is also believed that a natural calamity must have submerged other temples in the complex.

Surprisingly, the Tsunami in December 2004 exposed some of these submerged parts of temples in Shore Temple complex. This provided food for further research about other temples on this coast line.

Shore Temple looks like a Ratha (Chariot) from a distance. It is believed that Shore Temple resembles the structure of Dharmaraja Ratha.

Earlier the village was called as Mamallapuram that was a prominent centre during the rule of Narasimhavarman II of Pallava dynasty. Shore Temple along with other heritage sites and tourist places is worth your travel to Mahabalipuram.

Comments
Read more about: temples mahabalipuram tamil nadu religious travel
Other articles published on Apr 18, 2016
We use cookies to ensure that we give you the best experience on our website. This includes cookies from third party social media websites and ad networks. Such third party cookies may track your use on Nativeplanet sites for better rendering. Our partners use cookies to ensure we show you advertising that is relevant to you. If you continue without changing your settings, we'll assume that you are happy to receive all cookies on Nativeplanet website. However, you can change your cookie settings at any time. Learn more
Change Settings Continue